How To Effectively Use The Caddis 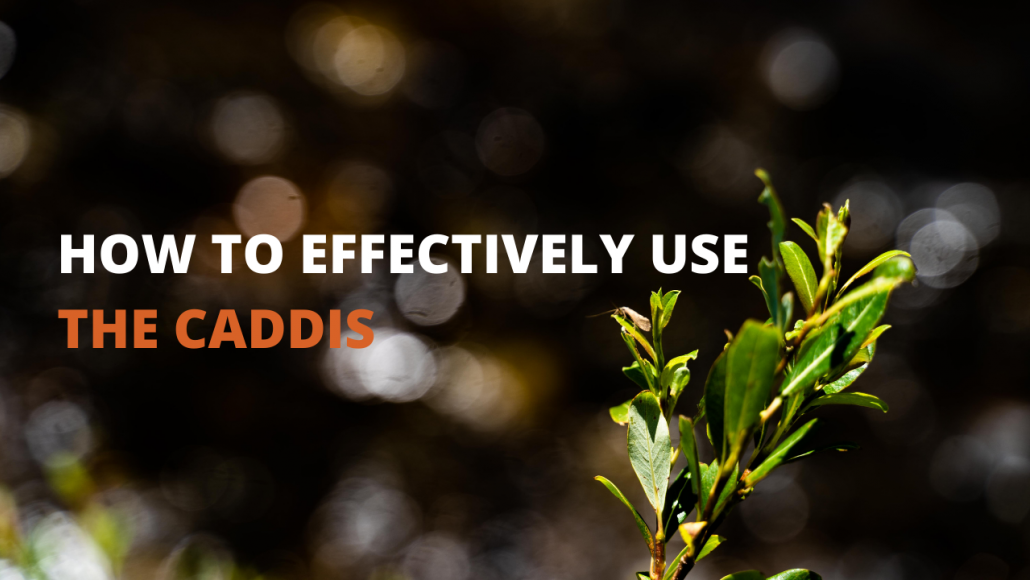 As we mentioned in a previous blog titled “Understanding The Caddis Life Cycle,” the caddis life cycle can be confusing and tedious to understand for an angler. However, there are only three stages an angler should be concerned about having represented in their fly box: the larva, emerging pupa, and egg-laying adult. Why? Well…these are the stages trout routinely feed on. The angler, and the prospective fly tyer, should focus on three components: size, the general shape, and color when it comes to fly choice. In short, patterns designed with soft body materials which are impressionistic rather than realistic can often be more effective out on the water.

Although an angler may already have the appropriate patterns, understanding how to use them properly is another crucial component. Below is a brief rundown of caddis fly tactics and hopefully some valuable information for the next day on the water.

This article will touch on a few key points discussed in Understanding The Caddis Life Cycle, so if you have yet to read that article, I’d recommend doing so before continuing down below.

In Understanding The Caddis Life Cycle, we learned that the caddis is resilient to most environmental factors. Still, locations with high water quality, ample oxygen levels, and food will be the most favorable for their survival. Areas with the above parameters often also have a healthy trout population.

Both cased and uncased caddis larva prefer living in and among the nooks and crannies found in rocks or downed debris at the bottom of a river. This suggests that, if an angler uses a caddis larva, opt for the pattern as an anchor fly if a weighted imitation is available. By using a weighted larva imitation as an anchor fly, the angler ensures that their imitation will hold tight to the bottom. Since the caddis larva dwells on the river bottom and rarely ever moves--unless forcefully by high water events--the angler will want to make sure their fly is close to the bottom with a weighted caddis as the anchor. The proximity to the river bottom is essential for the angler because the uncased caddis larva rarely ever sees the topside of a rock; conversely, neither does the trout see the underside. But, when a trout does see a caddis larva in the water, the strikes may be very aggressive.

Often, if an angler chooses to use a caddis larva pattern, they will be using one with a bright green body pattern, and a dark-colored beaded head. Typically this pattern imitates the series of moments when a caddis larva hooks itself to rocks, pebbles, or debris and slowly removes itself from its larva casing. While a bright green color is popular, other earth tone shades can produce similar results. Colors such as gray, tan, or muted green are highly effective color patterns one should consider.

While the caddis larva moves at a snail's pace removing itself from the larva casing, the emerging caddis pupa does not. Like a firework on the Fourth of July, the emerging caddis pupa shoots to the water's surface, an irresistible event for a trout. It is etched into the DNA of a trout to understand that this moment is fleeting. Hence, as the emerging caddis pupa makes its way to the surface, the trout will often swipe and strike aggressively at any properly presented imitation. For those wary about the speed at which this takes place, let us turn to Dave Whitlock: One must look quick or emerse the catch into ice water to catch much of this quicksilver stage before the pupa hatches out.

Since this stage is all about the pupa starting at the bottom of the river and getting to the water’s surface, fishing a representative pattern deep in the water column can be very effective. However, as more caddis pupa emerge, and rise to the surface, so will the trout. This is a perfect time for an angler to use a tactic called “inducing a strike.” This can be performed by slowly raising the rod tip upward, mimicking the emerging pupa rising upwards towards the water's surface. Sometimes, this slight raising of the rod tip–and light twitches–at the end of a long drift is all a trout needs to have instincts kick in and violently take the fly.

If the angler wants to fish two life stages of the caddis effectively, opt for an adult caddis imitation like an Elk Hair Caddis with a long dropper (~36” of Fluorocarbon Tippet) with an emerging pupa pattern like the Super Pupa. Utilizing a few twitches, similar to those mentioned above, can prove very effective for the angler, especially with this dry-dropper setup. As with any subsurface fly, depth is critical to success. Take a few mental notes of the fly's position in the water column and adjust depth accordingly, especially if no bites occur!

Unfortunately for the caddis, the emerging pupal stage is when they are most vulnerable. During this time, trout take advantage and feed heavily. This mainly occurs in the days leading up to significant hatch events. For the angler who is looking to land a fish on a caddis imitation, but is a bit early for a significant caddis hatch, consider tying on an emerging pupa.

Once the emerging pupa has made its way to the water's surface, the pupa is now an air-breathing adult caddis. Once free from the water, the air-breathing adult flutters its wings, immediately seeking refuge among nearby vegetation, and often groups with other adult caddis. For the prospective angler looking to find success with an adult caddis, it is essential to understand the most common positions the caddis will be in during their adult life: the resting adult, surface fluttering adult, spent adult, and egg-laying adult.

"The female caddis is more prominent in size than the adult male caddis. If you are looking to imitate an egg-laying caddis, choose a fly with a large midsection with two-tone coloration"

Understanding the above positions is best done by observing the water rather than immediately fishing upon arrival. Monitoring the water will allow the angler to study how the caddis acts and how the trout reacts. Are they sipping the caddis on a dead drift? They are probably eating a spent adult. Are they only eating when the caddis is lightly fluttering on top of the water? They might be keying into emergers that are just leaving the water's surface searching for refuge.

Take some time, eat a sandwich, and observe.

Before playing puppeteer for a few hours, it is essential to make sure the fly choice resembles the natural adults you’ve watched. The successful angler will have the correct size range, colors, and shape at the ready. Variety is critical because trout will eat adult caddis in distinct ways. Was there a loud popping sound on the surface of the water? That means that the trout are probably rising from the depths eating emergers. Are there multiple caddisflies diving directly into the water and not coming back to the surface? One could assume that trout are choosing the egg-laying adults. While the above “if/then” statements sound convoluted, they can be distilled into three meaningful words.

In my opinion, the adult caddis is one of the most exciting flies to use. The strikes are often aggressive, the time of year adult caddis flutter around is often picturesque, and the presentation of an adult caddis must be delicate and done with grace. The downside? The time frame to effectively use an adult caddis is often limited to a few months out of the year. However, exceptions do exist. While some, like myself, enjoy capitalizing on fleeting moments, others do not. Moreover, for those looking to extend the opportunity for using a caddis pattern, understanding the above material and the material found in Understanding The Caddis Life Cycle is a great first step.

If you want a deeper understanding of the caddis life cycle, top patterns, and where to find them, books such as A Guide To Aquatic Trout Foods, Colorado Guide Flies, and Curtis Creek Manifesto are fantastic options.

LEARN MORE ABOUT CADDIS WITH THESE BOOKS