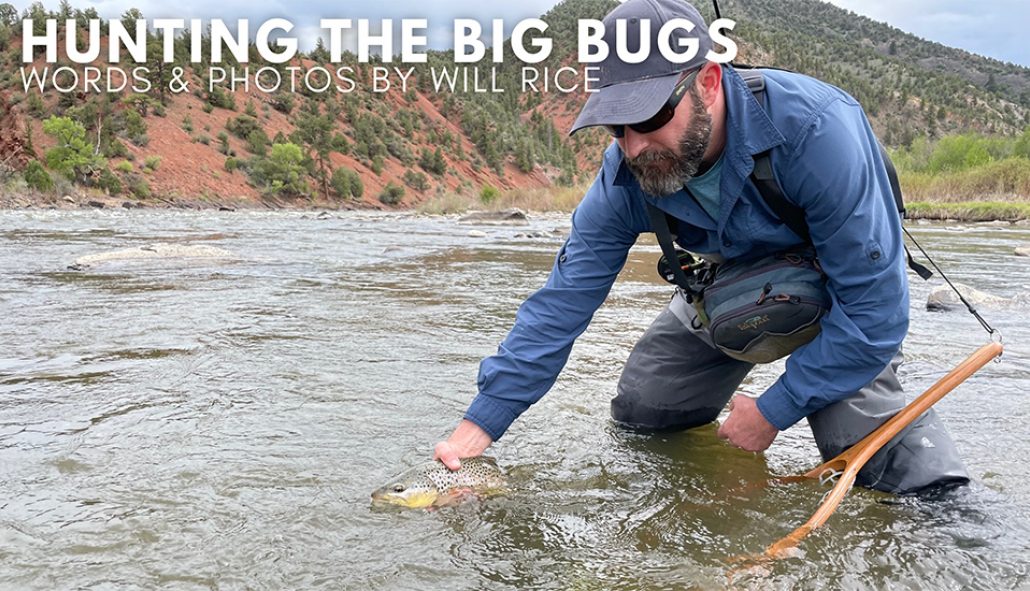 I’ve chased the salmonfly hatch along the banks of quite a few rivers. The Rio Grande River, the South Fork of the Snake, the Deschutes, the Gunnison and the Colorado River – all have one thing in common: a mixed bag of results.

These days I temper my expectations when I go hunting salmonflies (Pteronarcys californica). I go into it knowing it could be one of the best of days – or possibly the worst of days.

It seems that Murphy’s Law plays a large role in a salmonfly hatch: if anything can go wrong, it will go wrong.

Case in point. I remember one of the first times I tried to nail the timing of the hatch on the Deschutes River in Oregon after some meticulous planning. We arrived just as the sun began to rise. I remember poking around in the tall grass on the river’s banks and immediately finding massive bugs. After a “woot-woot” (and I think we might have high-fived), my buddy picked up a salmonfly, gave it a shake and hucked it into the water. We watched as it danced and popped on the water’s surface until….. WHAM! A famed Deschutes redside trout hammered the wayward bug.

Thinking that our calculations and timing were perfect, we assumed we’d be in for two stellar days of DIY fishing. But… as it turned out, we were there too early. We threw a ton of different salmonfly patterns but literally could not get a fish to look at our bugs. Although the adult salmonflies were there in the grass, it appeared that they had not yet made it into the water so the fish were not keyed into them on the surface.

On the opposite side of the spectrum, I remember fishing a salmonfly hatch from a boat and having a lights-out day. Fish were greedily eating just about any big and twitchy thing that hit the river’s surface – salmonflies can reach over 2” in length. The following day, we fished the same float but the we couldn’t get a fish to rise. About mid-day we hooked a random brown trout on a big dry and when I took him out of the net there were salmonflies – still alive – literally falling from his mouth and pushing out his distended belly. The working theory was that the fish had literally gorged themselves full in that last 24-hour span.

Murphy’s Law. You win some, and you lose some.

The lifecycle of the salmonfly is key to understanding to maximize your fishing experience. Salmonfly nymphs start on the river bottom and make their way to the bank and shimmy out of the water and onto rocks, grasses and small tree branches close to the river. Then, they do their final molt – which if you are at the back-end of a salmonfly hatch these spent body casings (called a nymphal exoskeleton) are easy to find and seemingly everywhere. As the adults are hatching along the banks, this is where the male and female bugs mate. Then, the females will lay her eggs directly into or above the river where they sink and begin the process all over again.

If you take an observant pause from your fishing, you can see these different lifecycle events happening all over the river. My favorite is watching the big bugs flying and fluttering in the air – they remind me of drunken hummingbirds.

This hatch can occur on rivers in North America from late May through early July. Not only can the timing be tough to nail down, the hatch typically migrates – upstream when rivers are reaching peak flows.

With low expectations we ventured out to the Colorado River to hunt for salmonflies. I had heard that they were up high and I figured that is where all of the other anglers would be. One thing I wanted to avoid, was getting too far ahead of the hatch and missing it all together.

My strategy and hunch: that even though we might not be in the thickest part of the hatch, there would still be a few bugs around and most importantly, the fish would still have the muscle memory to know what a helpless salmonfly splashing in juicy pocket water looked like.

As the ol’ saying goes, I rather be lucky than be good and I felt pretty lucky that our plan worked out. We saw almost no other anglers where we fished and had one of the most productive and memorable walk/wade days on the Colorado in recent memory. We did see a salmonfly or two buzzing and wobbling around and popping off the water, but the main game was finding slow moving pocket water. All of the takes were aggressive – it wasn’t a subtle follow and sip – it was fish bent on destroying their prey.

As spring moves toward summer and as rivers peak and begin to settle down, I’m looking forward to all of the other great hatches that can be experienced here in Colorado – hopefully more hits and fewer misses.