How To // Attaching Fly Line and Backing 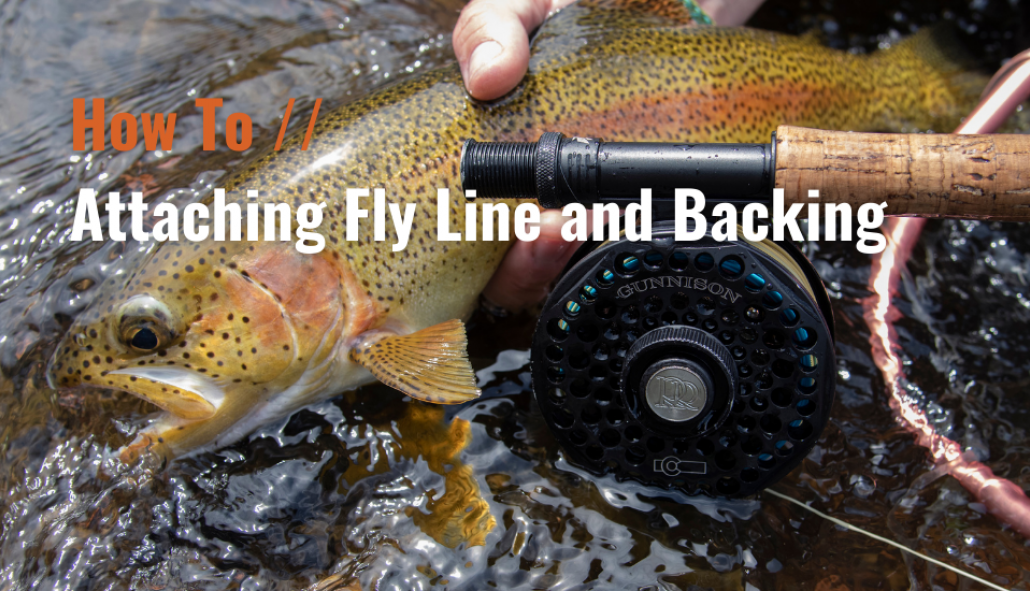 There are many fly shops and outfitters across the country that provide top-of-the-line service. Now, I may be a tad biased here but I will say it anyway, I think that Trouts Fly Fishing provides some of the best customer services in the industry. We want to make sure that when you leave our doors and hit your favorite river or streams, you are ready and prepared. One of the many ways we make sure you are ready for the river is by providing an expert fly line and backing loading so you are ready to hit the ground running when you put your car in park at the trailhead. Our staff will happily load your brand new fly reel and make sure every knot is tight and secure. It is important to note that a properly loaded fly reel spooled with the proper line weight, not only provides anglers confidence when they hit the water - but is important for proper reel functions.

However, like just about any hobby, activity, or sport there are and always will be, aficionados. Whether the term, "aficionado" is self-appointed or bestowed upon them, it is probably for a reason. And those who are highly knowledgeable about the sport are more than likely keyed into the nuances of the sport and naturally have their own personal preferences. It is the same reason that people dive into tying their own flies, it is having complete control of all variables and that includes learning how to load their own fly line and backing.

If you are interested in learning how to attach backing to a fly reel for the first time, continue on reading. Before we get into what knots you need and where to attach certain things, there are a few things we should cover first. First, let us go over the fly line (typically brightly colored in a fluorescent yellow) and the backing. If we break these two items into their respective parts we see that there is...well... fly fishing line, typically runs about 100 feet or so. Next, we have the backing. For those that do not know your backing is simply an additional line attached at the rear end of your fly line. This is important because this line extends the length and reach of your entire line system. This comes in handy particularly when a firey fish makes long continuous runs and you are unable to reel them in. In between your fly and the tag end of the backing are your leader and tippet, all independently secured with knots that tie everything together. Each knot in the system while not entirely specific to fly fishing is designed to do what knots do best - tie things together, but in specific and ways and with a purpose. If done correctly these knots will not detract from standard fly casting and often you will even forget they are even there.

The backing is a little extra line that wraps around the reel portion of the spool of line that extends the overall reach of the fly line of your choosing. Look, you may know this already but it is important to reiterate again, a high-quality fly line is VERY one of the most important components of your fly fishing system. END OF STORY. I cannot urge you enough to invest your money in a high-quality fly line. If you are someone looking to get into the sport and have a fixed budget, set aside a good portion of it for a fly line, please. This comes from personal experience that a high-quality fly line will make your time on the water much more enjoyable.

Now that I am off my soapbox let's look at the fly line. Typically fly lines are no more than 100' in length but, do come in many different varieties and styles. For example, a 6-weight line is specifically for 6 weight fly rods. A good rule of thumb is to remember that the fly lines almost always match the weight of fly rod they are designed for. Now, back to back, overall the length and type of backing either you select or are recommended most often reflects the type of species involved or targeted. This is more important for bigger fish and saltwater species that tend to make longer consistent runs. Hence, backing comes in weight categories to support the line and the expected size of the catch as well.

What is a Fly Line?

As we just mentioned, the selection of fly fishing lines is determined by the type of fishing preferred, the fishing spot, the time of year, and the expected size of the catch. If the type of food the particular species in question eats in, say, March or April is underwater, then you probably want to select a sinking line to get the fly down where the fish are. Conversely, later in the warmer months when the fish are striking at flies on or near the surface, you probably want to select a floating line that will present your flies delicately on the surface of the water.

Fly lines come in a laundry list of shapes and sizes but generally fly fishing lines are of two varieties: double tapered, or single tapered, and weight-forward. Double tapered lines essentially have two alternating diameters – skinnier then thicker, thus the taper – and are the more delicate of lines and said to be easier to roll cast. Weight-forward fly lines have more weight at the front end of the line and are heavier overall. They are generally harder to roll cast but can be better to control in heavy winds and when making very long overhand casts.

As you move out from the reel toward the fly is the leader. The leader attaches to the end of the fly line typically by a welded loop to perfection loop or welded loop to welded loop, regardless of the knot this is the all-important connection between the line and the fly. Leaders are typically around 9-feet long and have a similar diameter to the fly line (typically denoted by X) they attached to, but then gradually tapers to a much narrower diameter closer to the fly. This allows for greater control of the fly when casting. Tied off your leader is your tippet, an even narrower piece of line that, is roughly the same diameter as the last 12 to 15 inches of the leader. Tippet can be replaced separately and extends the life of your leader.

What holds this all together – reel to backing, backing to fly line, fly line to leader, leader to tippet, and tippet to fly – are a series of specific fly fishing knots. Many anglers have their own preferred attaching knots and methods, but offered here are some of the most recommended among the fly fishing world.

How It All Works

An arbor knot is generally preferred when attaching the backing to the fly reel spool. After that comes an Albright knot. An Albright knot is the most popular connection when connecting your backing to your fly line. Want a hot little tip? Your backing is often made of Dacron, while the fishing line is plastic, so this type of knot makes a strong connection between the different materials. A Nail Knot typically connects the line to the leader because it provides for a straight connection between the two to maintain casting accuracy. However, when you look at a lot of leaders today you will notice that many come with welded loops or perfection loops for easy attachment to fly lines. A Blood Knot connects the leaders to the tippet because it is lightweight, strong, and more importantly low profile. Then the tippet attaches to the fly line with an Improved Clinch knot or inf you are tossing streamers, a nonslip loop knot.

Each of these knots is selected for the task at hand with consideration given to the diameter of the material and, of course, strength. As you get closer to the fly you will notice that the knots are selected to be as unobtrusive to the fish as possible. It's all in the little details. When it comes to your fly reel each one will include instructions that will specify the length or amount of backing you should use when spooling it all up. If you are spoiling up your backing and fly line for the first time it is best practice to lay out everything and all its components, the best part is that all you need is a pair of nippers for trimming tag ends.

Before you begin it is best to practice tying the various knots with a section of paracord. Also, it should be worth noting that most new fly reels on the market today are designed with left-handed retrieve as a default. For those right-handed retrievers out there do not worry, reel manufacturer’s included instructions and how-tos for changing your retrieve. Once you are ready to start, start with securing the backing to the spool and then slowly begin winding it on, then moving to line and leader, tying the prescribed knots as you go. Pretty easy huh? I know, you read all of the above just for me to tell you how to do it in a single sentence. Don't hate me too much. I think above everything I thought this would be a good opportunity to understand the components of a fly line system rather than just give you the information. What fun would that be?

If you are interested in learning more about knots we offer two levels of courses geared to making you a better more informed angler. If you prefer to learn at your own pace visit our ANIMATED KNOT GUIDE which goes over every knot we discussed today! 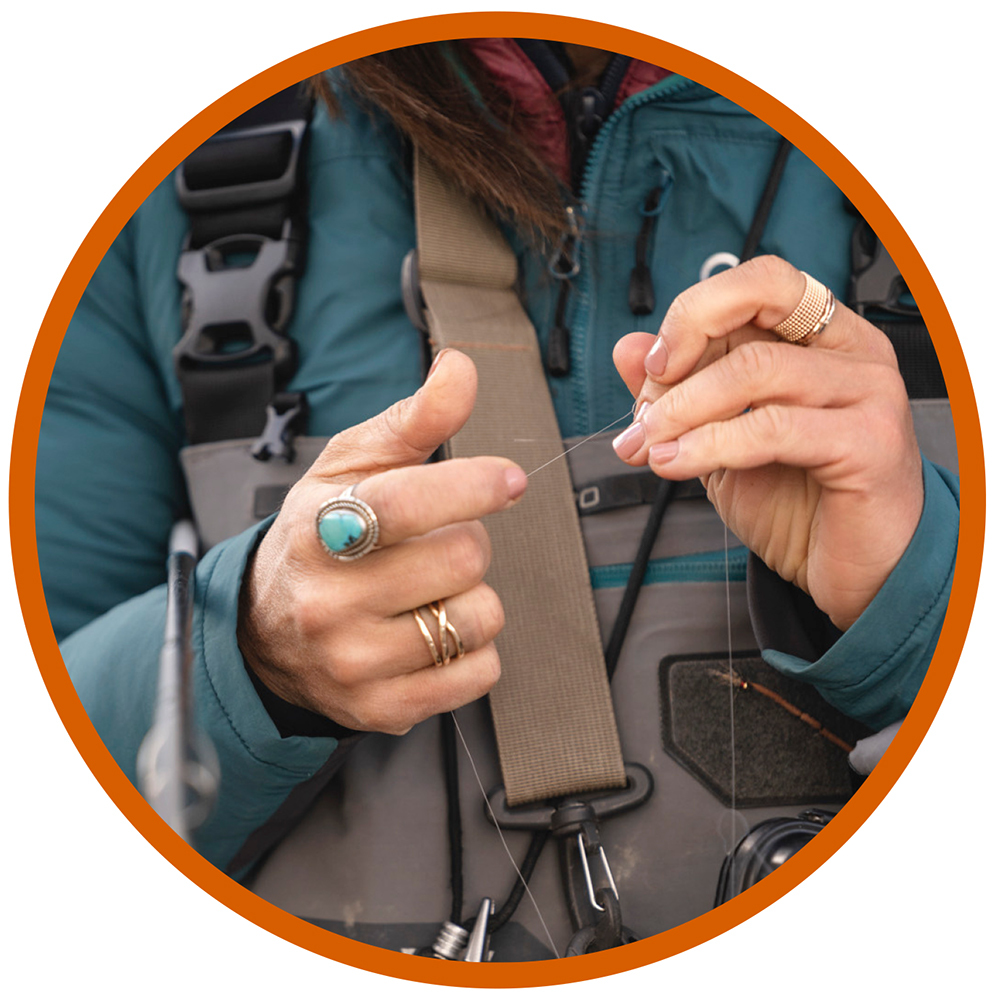 At the end of the day, it is all about learning and practice and I hope you take what you learned today and practice yourself. Then, maybe pass it on to someone else. At least that is the goal.

As always, if you have any questions, comments, or lingering ideas about what flies to bring on your next trip to the water, we have your covered. Come swing by the shop, have a beer on the back deck and enjoy our space. If you enjoyed today's post or have some comments feel free to send them over to my Instagram or email brandon@troutsflyfishing.com or brandonrod15 on Instagram.