FREE SHIPPING ON ALL ORDERS $50 AND OVER
Trouts Journal

PHOTO ESSAY: The After Work Special 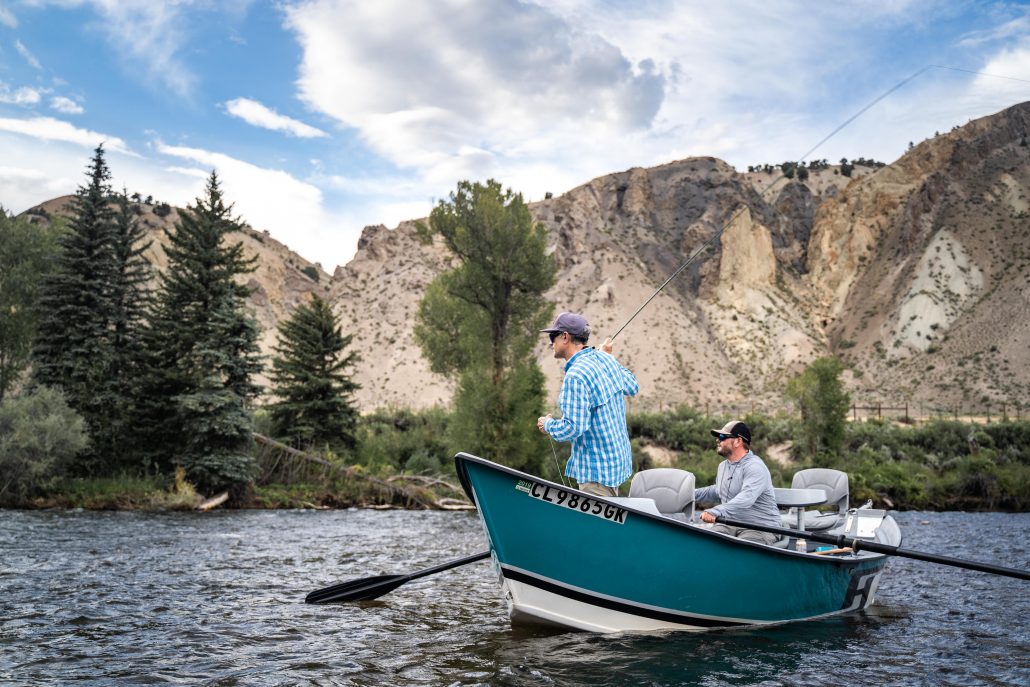 If you really want to get to know someone. Jump in a drift boat with them. There's nothing quite like spending 5 to 10 hours in a confined space trying to catch a couple of fish on artificial flies. Without the distractions of the modern world, you're likely to talk about damn near anything. At this point, I like to think that I've fished with Trouts Frisco General Manager Zeke Hersh enough that I know him pretty well. Damn, if I wasn't blindsided by some of the most random, deep cut Zeke info during our trip down the Eagle this week. But, that's the thing about floating. You'll liable to learn any number of things about a guy.

Before we get to the good stuff, let's back up a little bit. With flows dropping across the state, we snuck out of our Frisco location for a little afternoon float down the Eagle. Zeke and I were joined by Trouts Frisco Guide Tim Suplee at the shop around 1:00 PM and we were hitching Zeke's boat to his truck by 2:30 PM. With some clouds overhead, it was hot for the two Summit County residents, but this here Front-Ranger was comfortable as a cucumber. Let's get to the photos...

Zeke gets his new baby ready for action. He bought a new boat in April...and I hadn't seen new Blue in person quite yet. Best to keep it under wraps.

Tim rigs up his dry-dropper setup.

And makes sure he had the essentials. Like Modelo, Hamms, Gatorade, and a lunch bag filled with Chubby Chernobyls.

Tim bites off a little bit of Trout Hunter tippet for his dropper. See that black lanyard hanging off his neck. There are nippers at the end of them. I own nippers too. Like Tim, I'll use my own teeth more than I should.

Zeke picks out a winner. Black Peanut Envy...a man after my own streamer heart.

Tim donated a couple of small droppers to the boat launch. We've all been there when you're trying to get on the water fast.

and we headed towards the first drop.

I was rigged for streamers with the Sage Igniter 691-4. I also chose a black streamer.

We dropped into an eddy and Tim threw his dry-dropper rig.

It wasn't long before Tim was plucking a couple on Prince nymphs.

After snapping a couple of photos, I had to try my hand at throwing streamers. Black was productive.

Tim put away the dry-dropper rig and started chucking some small tan streamers.

Zeke tried to join in the party when we tucked into an eddy. Three dudes casting in a drift boat is one too many and we got a little tangle.

We kept on keeping on and Tim started laying into a couple with that tan streamer.

Tim and Zeke kept on playing like they'd throw olive. If you know me, you know how I feel about olive streamers. This fish...ate tan.

If you've made it this far in the photo essay, hopefully, you're just hanging around for a little dirt on ole Zeke. While this isn't the craziest thing I learned, Zeke was putting back a couple of Pamplemousse La Croix. Very fancy Zeke.

When we pulled into another eddy to work the dry-dropper rig, Zeke started letting out a couple of his signature hawk sounds. I've fished with him enough that I know anything that sounds like a bird of prey is probably just Zeke trying to get you whip your head around looking for a bald eagle.

Tim hooked up with a nice brown and Zeke dropped a bomb. "I owned a canary as a kid."

There it was. The thing you'd never know about Zeke unless you spent a couple of hours in a drift boat catching some solid Eagle River trout and having a little bit of fun. A canary. Zeke owned a canary. Look, I'm not here to judge. I owned a Zebra finch as a kid, but I didn't remember that until just now.

After that shock to the system, Tim kept on working this run.

And his chubby started getting annihilated. Summer is here!

We kept hitting pockets on our way downstream. Tim and I kept on putting solid fish in the net.

It was time to switch. Tim warmed up his shoulders and gave up the front seat to Zeke.

Zeke started with the trusty dry-dropper rig. He's a bit partial to them.

The scenery was pretty good.

And the fishing for canary boy was pretty damn good, as well.

This man owned a canary as a kid.

Tim admired and then enjoyed his Hamm's.

We ran into a moose.

And then capped the day...

Just about to say "Bye now"

Zeke finished out the day with streamers and it was a really good afternoon float of fishing.

Good enough to put this Peanut Envy on the injured list.