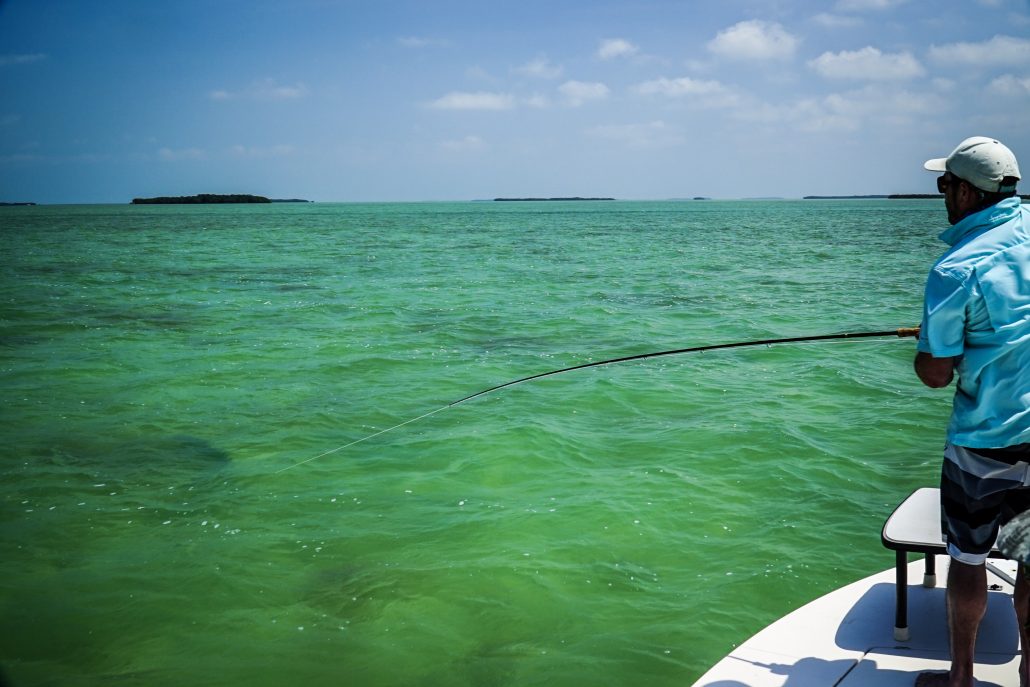 Without communicating at all, it just so happened that I was going to be down in the Florida Keys the same days that Tim Suplee was going to be down as well spending some time with family member who’s photograph is in the Webster’s Dictionary under the term “fishy”. We talked about getting out together and Tim mentioned that he had an open spot if I wanted to come along and chase some poon (Tarpon). As you can imagine, I say hell ya! Here’s a few photos I took of a day that I will remember for years to come.

Rigging for Permit in the afternoon. You get your shots, you take youre shots, or you just put the rod back down an go "sightseeing". Your tour guide pointing over at that fish you missed while starting the boat to move to a different spot.

Hands down the fastest double biminis I’ve ever seen, the shutter was on 1/1250th of a second… got it? Good!

Speaking from my perspective, fly fishing in the salt puts me in a completely different mindset. In detail, I find that when I am trout fishing, it’s a place where I find serenity and work other stuff out. When I am here looking for fish I am completely focused in what I’m doing, and hunting for another shot. As you can imagine my first day ever fly fishing on the salt was humbling as sh*t (and not to mention in the Keys). I went into this trip with the expectation to just learn out there and jumping tarpon would be the icing on the cake. A few clouds in the sky, but for the most part we were out there with blue bird skies. Seconds before this, Tim jumped a 120lb female and even thought he didn't get to leader it and take a shot he was just speechless taking in that feeling. After a few hours on the water, we all went back and got into the general theme of “Easy Keyzi”. We had some drinks, talked about the day, where noobs could improve, gear, etc. We had the opportunity after grilling some steaks to catch that Florida Keys sunset from a special spot, Tim, Chris, the pups, and myself hopped back in the boat to take in what I felt was an amazing way to end the day.

Its cool seeing siblings hang out and share a passion like fly fishing together. They were laughing about old memories and taking in the backdrops. Ending the day with a cold one. I learned that day just how legit the Yeti Colster was out there in the Keys.

Definitely not as fishy of a photograph, but we were all sitting there on some lawn chairs on the beach talking more about the day we had on the water and enjoying some cold beverages.

It was a great end to the day, and I can’t wait to be back out there again next April!