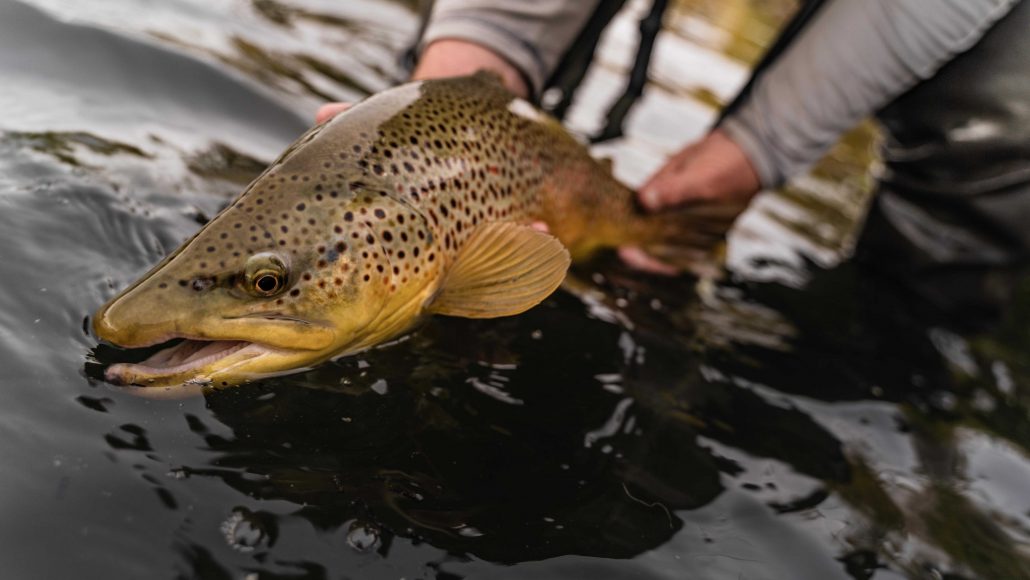 "I hope you're ready to throw down tomorrow...I'm talking that 4th Quarter, Game 7, Extra Innings Mentality...None of that rec league bull..." read the text I got from Tanner's "little brother" Zeb on Monday night. If you know Zeb, you know he wasn't messing around. He might have been kidding sort of, but, it had been a while since Tanner, Zeb and myself had shared the water, so there's no doubt that endless amounts of "You missed the good water!", "You suck!", and "If you don't catch a fish in this run, we can't be friends anymore!" were about to be unleashed if anyone of us wasn 't getting the job done. You know, friendship stuff.

With actual fall weather, clouds, and rain in the forecast for the next two days, Tanner and I couldn't leave Denver soon enough. 2 AM Tuesday morning, we loaded my truck with more things than we actually needed for two days of fishing and headed towards Zeb's family's ranch. By no means is it a fishing property, but nice, wild fish live there...so, who are we to turn that down. A couple of hours later and Tanner and I were organizing our streamer boxes and killing time waiting for Zeb to pull up... Colorado starting that Tuesday morning off on the good foot. We were an hour early and Tanner killed that time by organizing his streamer box. I was the lucky recipient of more than a couple bent hook, marabou-less streamers, while Tanner passed out the undesirables. After an hour of fly organization, Zeb arrived and we headed to the Ranch.

Zeb was all business. When skin tight Under Armor shirts and Budweiser visors are making an appearance, you know Zeb's here for business. He's only interested in that high leverage, extra innings kind of action.

So, naturally, we had a morning beer and took it easy for a couple of minutes. Tanner headed upstream to try and find a streamer eater of two... Tanner found a nice male brown who couldn't say no to a tan peanut envy. In the meantime, Zeb and I were picking off whitefish, wild browns and rainbows...but, nothing of size or note. So, we continued to move upstream. Cloud cover and cooler temps had me thinking that a black streamer of any variety would do the trick. I was wrong. And threw a couple nymphs on...He lost this fish. It was a nice one. I couldn't really talk, though. Tanner was already on the board with a nice brown and I had just missed a nice brown on the streamer. Zeb called his shot and jumped in this fast run on the upper reaches of the Ranch. Tanner and I were getting hungry, but we stuck around to watch Zeb put on a show. We were ready to head back to the truck for a 4 PM PB & J and a couple colder Coors Lights.

And bingo, Zeb was hooked up. Throwing out the big time backbend on the hookset. Zeb's dog Yampa was patiently waiting for a whitefish to get within striking distance.

Zeb showed off his best Eli Manning face and we headed back to the car. Earlier in the day, Tanner said, "You like chunky peanut butter?" I responded, "Hell yeah!" While I'm grateful to Tanner for picking up the food before the trip, I was a little disappointed when I opened up that all-natural, bunch of cut peanuts with a bunch of oil hanging out peanut butter. I was looking forward to some classic JIF action. Fishing hard can make you forget how much you hate all-natural peanut butter real quick though...that and a cold, light beer. We finished our food and headed back to work the late afternoon. Tanner found his drift in his favorite run...and bingo, a solid, colored up brown. A couple drifts later and Tanner was 3 pointing this solid rainbow like he was Tiki Barber holding the pigskin. That's better. This fish marked the end of the day. Tanner had put together a solid day with three good fish to hand...he scored his runs early. With Tanner in my ear, I'd be lying if I wasn't feeling the pressure to get it done the next day. The Rockies were playing the Wild Card game in Chicago and Tanner miraculously had service. Enough service that we were able to stream the game. We huddled around the iPhone to watch Tony God-Damned Wolters clutch up in the extra innings and send the Rockies into the NLDS. We headed to our camping spot after the game ended...and I promptly fell asleep sitting up in my truck. Tanner laid a couple of air mattresses out and he slept under the stars...until a 3 AM rainstorm dropped out of the heavens. Ask him about his struggles that night. The next morning, Colorado showed off with some respectable views. The arsenal was rigged up and ready to go... But, bacon and egg sandwiches were a must. Tanner took a shot at a couple of rainbows stacked up just upstream of Bridge Run on Zeb's Ranch. Got the drift right... And bingo. I was starting to feel the pressure. The trip was coming to a close and while I was catching fish, they weren't worth the long early morning drive that we did the morning before. So, I put the old reliable - black peanut envy on and stepped up to bat. Tanner chirped that if I didn't catch a nice one out of the run, that "We wouldn't be friends anymore." At that point, I wouldn't blame him. I was fishing like dog shit. A couple of casts later... Followed by some more solid browns.