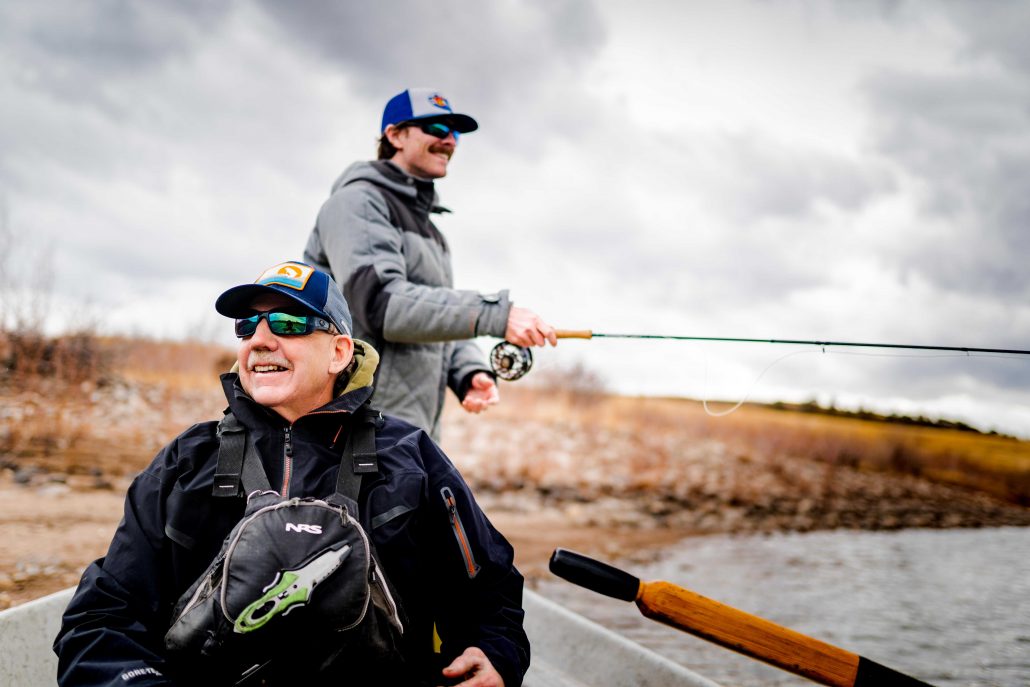 Winter is cool and all, but I think this time of year - "The Fifth Season" as we've dubbed it - is cooler. Warming temps, happy fish, streamers, dries, and nymphs are all reasons to love this time of year. With that in mind, a couple of weeks back when we were still firmly in the doldrums of winter, I started a group chat with Harlan Kimball, Trouts Frisco Assistant Manager, and Woody Kiehl, Trouts Frisco Guide, about getting out on the Colorado as winter started to turn into spring. After glancing at the calendar, this past week looked appropriate. Maybe a little early, but you never know.

At that point, trying to pin down the end of winter felt like a shot in the dark. But, after a week and a half of warmer weather rolled through, it was clear that the weather and fishing probably wasn't going to bad. In fact, there was a good chance it was going to be good. To be clear, by good I mean fish chasing streamers...no winter swinging. I wanted to pound the banks and enjoy those super visual Fifth Season eats.

Woody Kiehl has been guiding in Colorado for more than 20 years. Prior to that, he was a longline fishing boat captain for 25 years. To say he's spent his life on the water would be an understatement to say the least. Harlan and I hadn't had the chance to fish with the legend yet, so we were excited to see how Woody liked to fish on his favorite pieces of water.

Woody giving us his version of the Summit County tour as we passed by the cliff that was sourced for the Brown Palace Hotel here in Denver.

Shuck city population...12 brazillion. When we pulled up to the boat ramp, it was clear that the bugs were enjoying the warmer Fifth Season temperatures.

Woody rocks three rod vaults on his rig. Before I met Woody, I saw his three rod racks and thought...hmm, that seems excessive. But, Woody laid out his reasoning and I can see his vision. As a full-time guide who floats the Colorado River, you never know what kind of fishing the conditions are going to dictate, so, Woody comes prepared. Three dry fly rods, three nymphing rods and three streamer rods. One for each client and a backup one in case things go south.

Harlan was prepared with a solid selection of streamers...

Prepped and ready it was time to get on the water.

A large black Wedge Head was in the hopper.

Pounding the bank, we started moving fish right off the bat, but they weren't committing to the streamer for the first hour or so.

Eventually, we started getting into them and Harlan found himself in a quick scrap with bow.

Midges everywhere with a Blue-Winged Olive mixed in here and there. Fifth Season showing out.

Woody pulled into a big eddy and positioned Harlan to make a cast.

Harlan shows off another rainbow.

Harlan tried a couple more casts...but nothing was home.

Woody went into his bag of tricks to for a quick tandem rig for Harlan.

Oh, look, a black streamer caught a brown trout on a freestone. Who would have thunk?

Harlan found another one.

Harlan knows that we need to #KickPlastic, except when you need to balance your insides with pH balanced water things.

As we mentioned, Woody has plenty of stories. The man has been on the water for 40 plus years between Captaining a long-line ship to guiding on the Colorado. The man knows water and fish.

As the float came to a close, Harlan hopped out to work some soft water.

First, he cleared some ruffage.

Then he roped himself another rainbow.

After pausing over that big rust-colored streamer, Woody started to rig up a jighead nymphing setup.

Woody slid in behind Harlan and plucked a couple out.

We kept the float moving downstream and it wasn't long before we were getting into a couple of more. It's hard to beat good streamer fishing in March. Fish are starting to get more active and more willing to move some to distance to a fly.

Everyone talks about those fall colors, but a spring brown is hard to beat.

Sharing a laugh because Harlan told us about this one time that he caught a fish near a rock we just passed. Great story Harlan.

Tools of the trade.

And evidence of a day well-spent on the water.