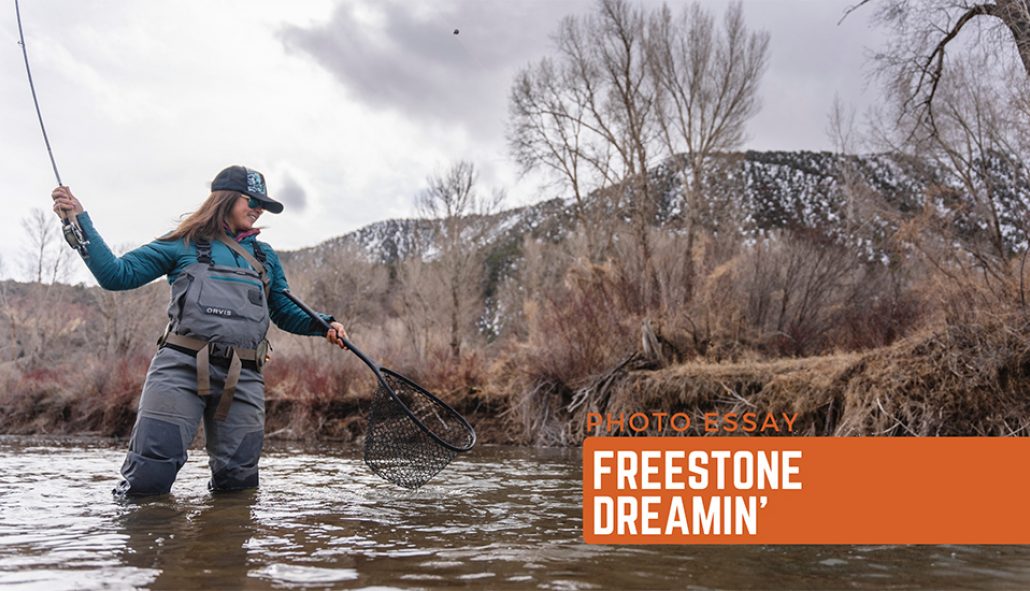 When conditions line up for good spring fishing here in the Rockies, it's hard to pass up. Cloudy days usually make for banner blue-winged olive and streamer days...which just so happen to be pretty cool in our book. Trouts own Courtney Despos (Director of Education), Katrina Brisbin (Marketing & Content Assistant), Jethro aka El Jefe (Courtney's nine month old Bernese Mountain Dog), and myself decided to head up to the Eagle for a mid-week session.

With some clouds in the sky, Courtney was thinking blue wings and streamers. The old spring time one-two punch. Can't go wrong with that combo when spring time clouds roll through. We got to the pull out and Courtney started rigging up. The Radiation Baetis made the cut for a little early morning nymphing.

We walked down to the river. Young Jethro in tow. A couple of casts were made and we started hearing some wild commotion downstream. It was a river otter. It clearly wasn't a fan of us invading his domain and we decided to bushwack upstream and let him do his thing.

We gave him some space and Courtney moved upstream a couple of bends. A couple casts in and Courtney had already slid a handful of trout into her Nomad Mid-Length Net. El Jefe was playing around on the bank and thwappp...a(nother) river otter popped up. I swear that he started barking out instructions. "GET OFF MY LAWN." None of us had dealt with a Clint Eastwood-esque otter before. We started googling river otter-human confrontations.

We took a couple looks at this fish and decided it was probably best to switch it up...we walked about a quarter mile upstream to find a calmer setting.

The next bend didn't have nearly as much going on in terms of aquatic threats. El Jefe felt at home. A couple of casts were made and it wasn't long until a couple more of those freestone trout were net bound. We weren't seeing any Blue-Wings on top, but baetis imitations were certainly getting the job done subsurface.

Jethro snuck off down the bank as Courtney roped another one.

And what do you know, Jethro came bounding back across the river to check on the catch. Another quality brown to the basket for Courtney.

After some good-boying for El Jefe, a light flurry turned into a pretty healthy snowstorm. We were hungry and decided to make the run up to the Eagle Diner for some grub (not pictured...but eaten). After our lunch break, Courtney got down to brass tax and started tossing streamers. Those in the know, know that Courtney loves throwing streamers...specifically olive ones. So, it wasn't a surprise when a little articulated olive streamer found it's way onto the end of her line.

Streamer eats. After a couple of streamer eaters found their way into the deep bag, we called it a day. It was a good spring freestone day, to be sure. A quick walk back to the car...and we were headed east on I-70. We're going to ignore the part where it took us 5 hours to get home because I-70 closed for winter weather...and just focus on the good parts. Bye now.