PHOTO ESSAY // Not Half Bad - A Redfish Story 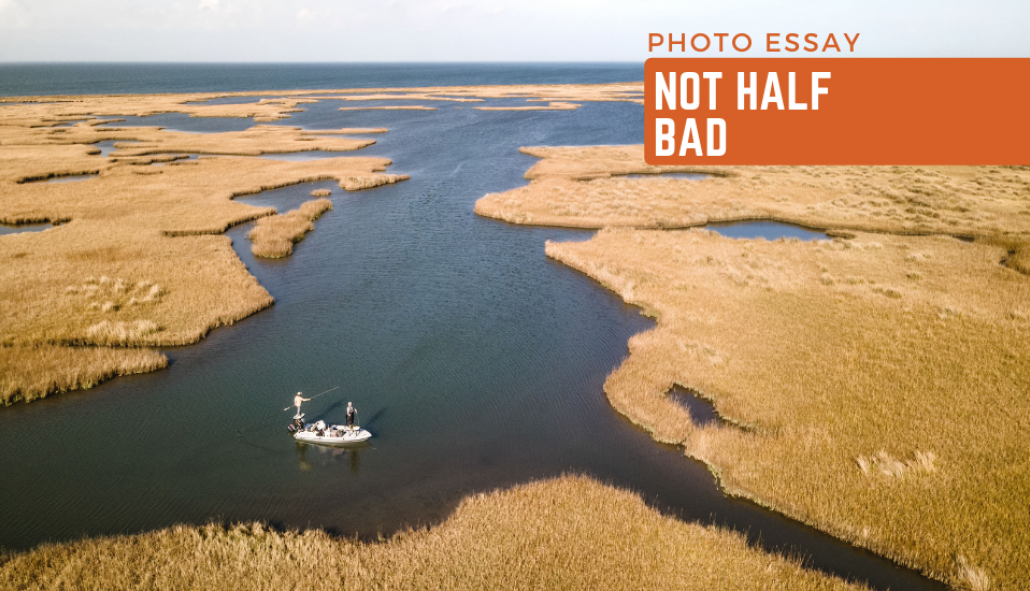 It was a cold December day, about a month before our trip to fish with our good friend Chuck McGraw of Southern Fly Expeditions. Tanner and I were sitting in a Carls Jr in Laramie, Wyoming stuffing our faces with a couple of Western Bacon Cheeseburgers attempting to fuel the rest of our drive back to Denver after a trip up north to swing streamers.

Like any self-respecting angler, the topic of conversation strayed from what we were doing...to what we were about to do and how awesome and perfect it was going to be. Anyone who has booked a saltwater fly fishing trip knows that the anticipation of the trip is half the fun. Dreams of tailing saltwater fish chowing your perfectly presented fly and ripping drag will run laps in your big dumb brain and convince you that everything was going to work out just right this time. This time was gonna be, dare I say, EPICCCCC!!!!

Now, bear in mind, Tanner and I are relatively new to the saltwater fly fishing game, but it's only taken a couple of redfish trips to realize that all sun and no wind is quite preferable. The only time we've experienced those conditions, we were lucky enough to be in the marsh the first sunny day after a stretch of three weeks of rain. Turns out redfish don't love huge pulses of freshwater. Who would have thought?

Anyways, back to the daydreaming at Carl's Junior. When we were planning the trip, it was mentioned that January isn't a very rainy month. It's the third driest month in Hopedale on average, in fact. Hopes were high. Did we dare? Did we dare look at the forecast a month out? Our curiosity got the best of us and I pulled up the Hopedale, LA forecast and scrolled over to mid-January. In a hilarious, but somewhat predictable turn, the next four weeks were filled with sun and steady barometric pressure - and the days in and around our trip - there was rain and wind in the forecast. It was a shit sandwich, in fact. The days following our trip, it was back to sun and no wind. We laughed it off. Just like every old-timer ever will tell you, "Don't like the weather, just wait five minutes."

As the days went by and we emerged on the other side of the holidays, it was becoming pretty clear that the folks at weatherunderground.com have their shit together. The forecast for bad weather 30 days out was holding true about a week out. While we were a little worried about our trip getting canceled, we started cruising down the road of acceptance. "Hey, I don't care what the weather is like...I'll just be excited to get out on the water." By no means, is that lip service. We don't have the means or the time to book out weeks of fishing in the bayou. So, when we can align our schedules for two days on a skiff, chasing redfish, we're going and we'll make the best of it.

After a couple of 2022 airline cancellation scares, we found ourselves in New Orleans the night before our first scheduled day. While the forecast for Day 1 didn't look great, we remained positive. As a couple of aging and responsible fellows, we forwent the pull of a night out in NOLA to make sure we were early to the marina.

Our alarms sounded and Tanner checked his texts. Chuck hit us up with good news, the forecast improved overnight and we were a go for day 1. It was foggy and there was still a chance of rain, but it looked like it would be clearing by mid-day. After an hour drive to Hopedale, we were greeted with clearing skies and relatively calm winds as we waited for Chuck in the rental car. Chuck pulled up and we hopped our doughy Colorado asses in the skiff and motored our way out to the marsh.

Tanner and I like to think of ourselves as grinders. If the conditions aren't perfect, we certainly aren't scared of putting in the time and effort to find a couple moments of success. That's exactly how the next eight hours or so played out. Chuck's a grinder too. So, we put our noses to grindstone and looked for pockets of good light and windbreaks. We kept pond-hopping our way around the marsh. The light in the beginning of the day wasn't optimal, but we found a windbreak and cruised through our fair share of fish. Unfortunately, we couldn't see them until we were essentially on top of them. We threw a couple desparation casts at them, but they were ghosting us left and right. It's always encouraging and frustrating to see fish like that. We knew we were in the right place, we just couldn't put our eyes on them in time to make a quality presentation.

Luckily, blind fishing for redfish has some striking similarities to banging the banks for brown trout out of a drift boat. Tanner and I are right at home in that world and we started making some lucky casts that brought some decent enough redfish to hand.

We kept bouncing from shoreline to shoreline. Pond to pond. Lake to lake. As our day was coming to a close, we found a little pocket of decent enough sun and the absence of the "W" and Tanner put the first quality sight-fished redfish of the trip on the board.

Not half bad at all.

Tanner sent this one back and things were trending in our favor.

The light got lower and we made the run back to the marina.

We ended Day 1 pretty late. I like to consider myself a realistic optimist. Weather on Day 1 played out a bit better than expected and who was to say the same thing wasn't going to happen to us on Day 2. Why not us? After all, the forecast for the second day looked better to our less capable trout-centric brains.

After we made the drive back to NOLA, we started getting some pretty depressing texts from our boy Chuck. Weather was looking worse and worse. But, we were holding out hope that a repeat of Day 1 was in the cards. After some good food in NOLA, we responsibly put ourselves to bed at a respectable time and set ourselves up for success on Day 2. We woke up to clear skies and a gentle breeze visible from our hotel window. Bzzzz. Tanner's phone buzzed with text from Chuck. "Not looking good, man. The "W" is gonna be bad." Turns out, the forecast took a turn and the winds were going to exceed 30 mph and the chances of sight fishing with any level of success was pretty low. That was that. The kibosh was put on Day 2 and we decided to put ourselves back to bed.

After sleeping in our disappointment, we put our pants on one leg at a time like the Joe 6-Packs we like to think we are and started down the most stereotypical, basic New Orleans tour you could ever imagine. There are worse places to spend your canceled day, that is for certain.

Despite having been to NOLA more than a handful of times, neither of us had visited some of the more popular sights in the French Quarter. There were more than a couple of beverages drank - including a hurricane or two. It's hard to recall exactly how the night went, but old college friends were visited - some bets on the National Championship were made. Good times were had. The next morning, we both convinced ourselves that we would never drink booze again, as we bounced around the back of the slowest, the herkiest, and the jerkiest airport shuttle known to man and headed back home to the Centennial State.

Don't worry bayou. We'll be back. It'll be different next time.