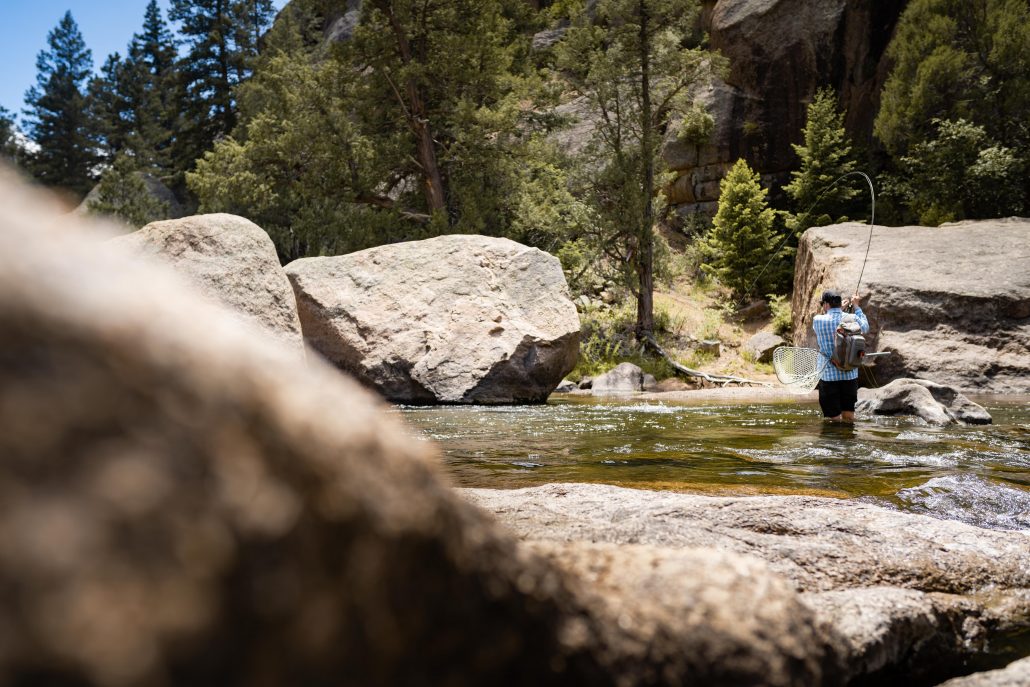 Editors Note: in 2019 Trouts sent out a casting call to our customers and followers to see if we had any aspiring writers who wanted to Contribute to the CURRENT. Steve Goodrum took us up on the challenge and submitted this essay. Since reading it the first time, I’ve had this same situation happen to me twice – once while fishing streamers from a boat and another time casting a dry fly to a feeding brown trout while wading. In both situations, I had a good run-for-my-money and both times I thought back to this article. I hope this might help you get a fish to the net as well. A big “thanks” to Steve for his submission.

As I was watching the Trouts' Five Flies for August 2019 video, I was hit with a little déjà vu. A couple of fishing friends and I had just been down to Gunnison a few days before the video was posted for a weekend of wade fishing. The water was still too high to comfortably wade the Taylor, the East and the Gunnison, so we decided to stop and fish the Dream Stream below Spinney Reservoir on the way back to Denver.

As the Five Flies video starts with Landon Mayer and Ivan at the truck getting rigged up for the day, I think to myself, “that looks familiar”. Cut to the first fishing scene and Landon is in an area that again looks familiar and he is fighting a fish that is working him over. After chasing the fish around the bottom of an island in the river and having a couple of failed attempts with the net, he gets a successful swipe. It is a thick-bodied brown, not the longest fish, but clearly a brute. A beautiful and unusual brown – humped back with a hooked jaw. My first thought as I am seeing the brown in the video is that I had just caught that same fish. The spot where I hooked the fish was virtually identical and the fight was very similar. A lot of chasing, a failed swipe or two, and then success. There were no cameras rolling, no photographic evidence, but I have the satisfaction of knowing I had caught the same fish as Landon. The water around this island was shallow enough that in both his situation and mine, the chase was possible to keep proper pressure and a fighting angle to eventually close the gap and get the fish in the net.

Fast forward in my day about an hour, and I am upstream working through some likely runs, both deep and shallow, with some blue winged olive emerging nymphs when I hook a rainbow that is significantly bigger. The kind of fish that when it jumped early in the fight, landed with the thud that sounded more like a salmon. A few big runs and maybe a little good fortune and I now have this big rainbow in a wide deep pool and I’m feeling reasonably good about the fight. I had a good hook set and have her attached with fresh 5x fluorocarbon. That feeling would change pretty quickly.

There have been a number of articles written over the years on landing big fish on small flies and light tippet, including some in the Trout’s Journal. Tips such as staying even with or below the fish in the river, keeping your fighting angles, applying constant pressure and applying pressure opposite of the direction of the fish’s head are frequently written about and are very important to success. I have even read tips that suggest putting your rod tip in the water to allow flow of the river to add a different angle of pressure on the fish. All of these are good tips and can be critical tactics in landing big fish.

I read a tip several years ago that I have not seen written about much since. If memory serves, it was from Lefty Kreh. If you are in a fight with a big fish and that fish decides to try to take you into a bad place, into a tangled mess, downstream into a current tongue or over a ledge as examples, take all the pressure off the fish and let the fish settle. The fish doesn’t really “want” to blaze into that tangle of limbs or downstream through heavy water. It is trying to find a way to make the pressure being put on it go away. I am not sure if this is learned behavior or not, but some fish seem to be much better at it than others. After the fish settles, slowly move into a better fighting position, close the distance if you can and then reengage in the fight. I once had to do this five or six times with a big rainbow on the Fryingpan tailwater below Ruedi Reservoir. Each time I did it, the fish immediately stopped its frantic attempt at escape and slowly turned to reorient facing upstream. A size 20 black beauty and 6x tippet does not put you in a position of strength, but by patiently releasing the pressure when needed, closing the distance when I could and reengaging, I was able to land a big, beautiful 26” rainbow. I have also used this technique successfully on other (mostly tailwater) rivers across the state.

Unfortunately, on this day on the South Platte, that tip did not come immediately to mind. The photo accompanying the story is really the beginning of the end. That big rainbow quickly decided it was time to head downstream towards the old bridge pilings. Instead of taking the pressure off, I kept the pressure on and started to chase, trying desperately to get back even or downstream below the fish. I was applying side pressure in the fight in an attempt to get the fish to move into the calmer water near the bank. This approach ended up being the recipe for sadness and woe. That fish and I parted ways at the bridge pilings and I sat down on the bank, hands shaking, knowing that I had just lost one of those “fish of a lifetime”. I have a few of those memories that replay in my head. The king salmon in Alaska that greyhounded away from me without ever slowing down, the tarpon in Belize that jumped into the mangroves getting me so tangled that I had no shot, quite a few other trout that ended up getting the best of me, etc., etc. Now, this one gets added to the vault.

Releasing the pressure in a fish fight is by no means foolproof. A small hook could work loose and when you try to reengage, the fish could be gone. None of the techniques, however, will work every time. In some situations, your odds of success will be better by giving this a try vs keeping the pressure on and hoping you can get the fish to turn. In the heat of the moment, we have to make a decision. We won’t always make the right one and I am certain there will be other fish that will enter the growing “one that got away” memory vault. With knowledge and practice of more of these techniques, we can only hope that when a split second decision is needed, we will make the right one more times than not.

If you are interested in contributing a story or article to the CURRENT please send an inquiry to will@troutsflyfishing.com.