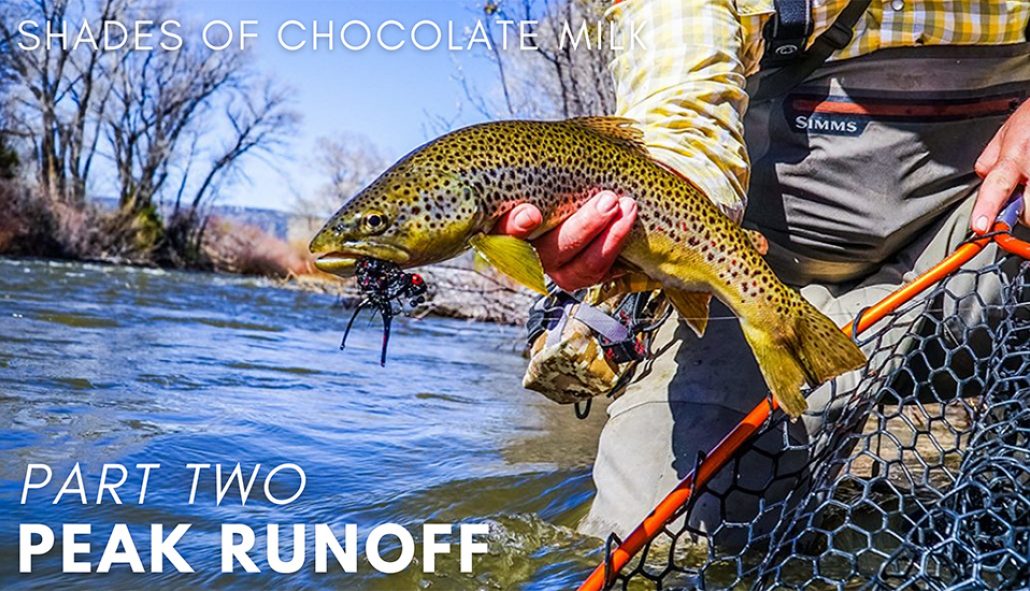 Note from the Editor: We’ve commissioned Reid Baker to pen “Shades of Chocolate Milk” - a three-part series - dedicated to fishing techniques and strategies throughout spring runoff. In Part I, Reid covered pre-runoff and the initial stages of this annual cycle when the rivers are starting to climb and sediments start to change water clarity. Now...Part II. - Editor, Will Rice

The line of a river’s hydrograph throughout runoff is an imperfect bell curve. It rises, it peaks, then it drops. Part II of this series is dedicated to that in and around that peak, when the river is at its highest flows, darkest color and, depending on the year, could even be nearing its banks’ capacity.

What are the fish doing?

During peak runoff, rivers are raging, they are dirty, and they are cold. This is generally not the most conducive time for a fish to be happily feeding in the middle of the current on bugs drifting by.

Trout are essentially in survival mode during this period. They will seek out any way to avoid being in the heavy current as it's not a wise use of their energy. As a result, they will hold in three key water types: behind structure, along edges by the bank, and in back eddies where the main current has peeled off the main flow. Regarding feeding, this will be relatively limited and highly opportunistic. Trout feed when they are comfortable, and this is not a comfortable time.

The decision to fish a river in its peak runoff is pretty subjective, as conditions vary so dramatically from river-to-river and angler-fortitude to angler-fortitude. The overarching theme of the “Shades of Chocolate Milk” series though is to encourage anglers not to put their rods away during this time period. There are still great angling opportunities. However, unlike the early and late stages of runoff, when technique is the primary modifier, peak runoff will require us to widen our scope. Maybe it means looking elsewhere and broadening your horizons.

The Diehard Freestone(ish) Angler: If you are truly committed and willing to gut out the runoff peaking river keep in mind a few things.

First and foremost, stay safe - this is not the time to test your wading limits. Also, there’s no point in wading out deep in this stage. As noted above, fish are oftentimes just off the river’s bank, back eddies or seams just along the current edges. Focus on the “soft water” or any section that provides rest from the fast current.

Second, think big, dark profiles or attractor patterns that show up early into view when visibility is under 10”. Be prepared to either fish very deep, or relatively shallow if you want to work the few feet just off the bank. Streamers will be your best bet: a dead drifted or slow-stripped black wooley bugger could be your best friend.

But if visibility is much less than 6” underwater and flows are ripping, I’d say bag it for greener pastures.

Turn Tail to Tailwaters: Tailwaters, or rivers below a dam’s outflow, will always offer a knee-jerk fallback, due to more consistent water volume and temperature. Subsequently because the dam acts as a sediment plug, the water will remain clear before any confluence of creeks or tributaries.

Though tailwaters will also usually have a “flushing” period where the dam releases larger volume of water for downstream needs or reservoir control, it is unusual for spikes in release to result in unfishable conditions.

Based on the above, it might sound like tailwaters become the “no brainer”. However, because of their consistency, notoriety, and the fact that it's just late spring or early summer and everyone is looking to get outside (anglers and non-anglers alike), these sections can become extremely crowded. Plus, the year-round angler has been relegated mostly to tailwaters all winter, so some may be looking for something fresh.

Embrace Stillwater: River wise, peak runoff can be one of the toughest times to fish a river, but it generally coincides with the best time to be fishing our lakes and reservoirs. Post ice-off, fish are eager to feed and trout are usually cruising higher in the lakes’ water column or shallow bays, which makes them easier to target on the fly.

What’s better, lake and reservoir fish can be larger and stronger because they don’t have to always be contending with the calorie-depleting current. In several high-country reservoirs, there is also good pike fishing, which can be incredibly exciting. For more information, check out Rick Mikesell’s most recent Warmwater Fly Fishing Forecast.

This brings me to my final point…

Expand your Species Horizon: For those of us on the Colorado Front Range, I can almost guarantee there is a good-to-exceptional warm water fishery within 15 minutes from your home. Runoff can be a great time to target non-trout species, both in still and moving water.

Pound-for-pound, bass are one of the hardest fighting freshwater fish encountered, and they can be caught both on surface and subsurface flies. Panfish provide great sport, especially on light rods, and the almighty carp has become one of the most sought-after fish to catch on the fly - testing even the most experienced angler. For me personally, targeting carp on the Denver South Platte is every bit as exciting as fishing a high-country trout stream. Sometimes even preferable, regardless of if its runoff or not.

So, when rivers are peaking throughout the region over the next few weeks, stay patient and widen your scope to ensure your most productive days. But be sure to keep an eye on those hydrographs, because the final stage of runoff as the river drops back into shape can be one of the best times of the year to be fishing. For more on this, be sure to tune into Part III of “Shades of Chocolate Milk.”