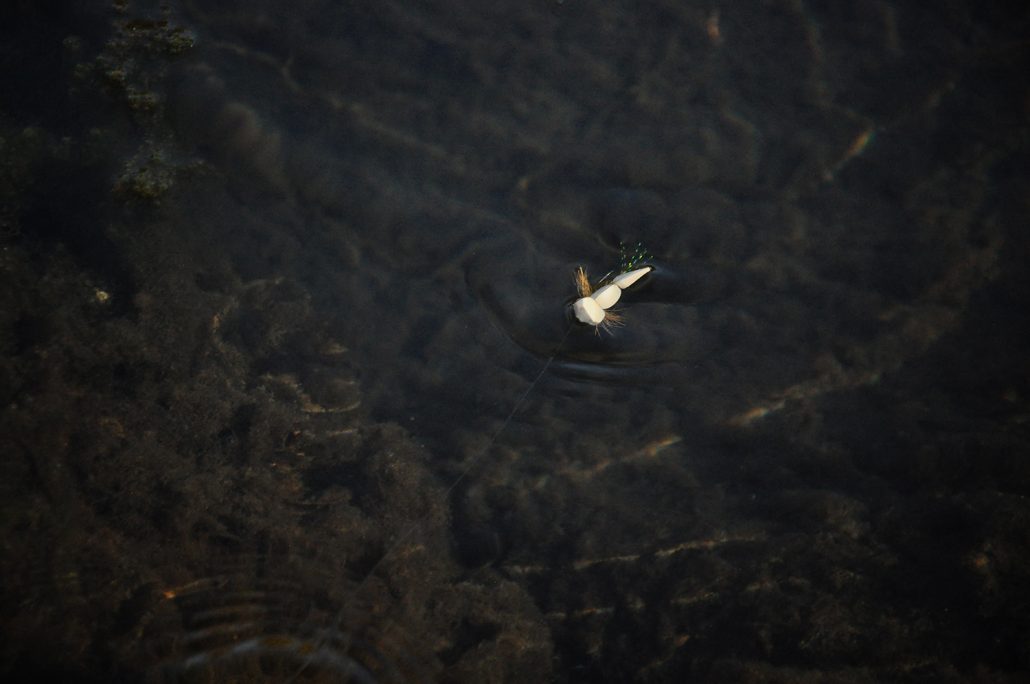 The Good Idea: I thought it made sense to tie on a skater. My thinking was: “if there is a 20% chance they eat a streamer… there’s some kind of chance they’ll eat a skater.”

I was out on the river with the Trouts Team - on a day off to a private ranch. The shop was closed and we were here to fish hard and soak in the fall season. I watched Tanner Smith swing and strip a streamer through a deep pool, raise a big trout and then we had a good laugh as it turned away at the last moment.

The Bad Idea: We were fishing on a ranch where fish don’t see a lot of different patterns – and at the same time, they see a lot of flies - in general. I snipped off my nymph rig, tied on a 12” piece of 3X tippet… and walked down the river. A skater might work.

When a big fish moves from his dark place to eat a skating fly he needs to commit. The skater, once it hits the surface can only remain a static target for a moment. At that point, it’s a dry fly. And then it’s ripped into the current – and is metamorphized. It becomes a skater – and a big meaty target.

This is a transformational moment. This is the moment when the fish makes the commitment – and after that, the violence ensues.

The Violence: I made a cast downstream at about 45 degrees and put the jet-black skater right into the center of the foam. I had about .5 seconds to rip a massive upstream mend. This was to keep the skater in the kill zone for about another .5 seconds. I waited for the crush.

I tried to rip another mend to keep the bug in the crease as it started to slowly bob into the faster moving seam.

Nothing. Foam was not home.

Now B plan. Swing and strip.

Big skaters do one thing and that one thing is important. They change sh!t up – and move a massive amount of water.

The skater hit the main flow current and I gave it a strip. “Whooossshhp schooomp.”

I’m a bass guy so I like flies that move water. I’m also a mouse-man and say things under my breath like ‘I’m a small mouse… I’ve fallen from the bank… don’t kill me.’ And yet on the next cast it might be ‘I’m a mouse… I’m going to drown anyway… kill me please.’

Not lying. This short, dramatic novella plays out in my head almost every cast when I’m fishing surface flies. Mouse patterns – skaters… I love the life and death drama on the surface of the water.

Fishing skaters for me is a combination of both. And when you find the right fish, he or she behaves like a serial killer.

The Destruction: Most of the time, when a trout eats a fly it is fairly subtle. Whether under a bobber, a sipped dry fly, or many times a streamer – you see a small visual distortion or maybe feel a tug. Here’s the thing: you will never see a subtle take of a skated fly. When a trout reacts to a skater, some type of flip gets switched. It is hard to explain until you have seen it – and then you see it again, and again. When triggered by a skater, trout behave in a way that’s not a normal follow… or a take. The violence is not always accurate – sometime it’s like a bomb detonating and other times it’s similar to a big-pike-swirl.

After lunch I walked down bank and eyed a nice bend and tail out. It looked “skateable.”

My second cast was downstream at 45 degrees and the skater did its thing. The fly hung for a micro moment and then bounced into the downstream flow. I didn’t move a muscle as the fly start to swing into the current. My breath ceased when I saw the massive wake that quickly formed behind the fly.

When you swing a skater, sometimes you can do so for a long time with zero feedback from the fish. But then, when things happen, they happen fast. In this case, it started with that wake.

This fish burst forward and tried to kill my skater. I mean, he really wanted to kill it. I’ve seen salt water fish slash at flies in the water. Same behavior – but a trout.

I stopped stripping and let the fly just float. I held my breath. Then another strip and splash, it has to keep moving. The pause in my strip didn’t stop the motion of the fly – it continue to swing. It drifted in the current in a less frantic pace.

Wham! Destruction. I set the hook and the fish turned his head at the same moment – the one-two combination that can often send both fighters back to their corners. Back to their corners with scars, from a quick, violent, and destructive fight. With that quick pop, the fish took my skater back into the dark depths where he came from.

The Epilogue: I stood boot deep in water thinking to myself and looked into the sky… ‘yeah… 3X tippet… that was a bad idea.’