From The Archives- Somewhere Down In The Seychelles: Ft. Scott Harkins

With the premiere of PROVIDENCE just over 24 hours away, we couldn't help but reshare this post. Our Simms Rep Scott Harkins was on the trip when the Providence trip and we sat down with him to discuss this trip of a lifetime!

We can't wait to see this film debut tomorrow night but one question still remains....HAVE YOU GOT YOUR TICKET?? IF NOT, CLICK HERE!!!

Many of you may have seen our Simms Rep Scott Harkins in and around the shop at various customer events. He may have even custom fit you for your Simms waders. Either way, I think it's safe to say the proper fit of waders was recently the last thing on his mind, replaced by the need to control heavy doses of adrenaline as a pile of GT's poured onto the flat he happened to be standing waist deep in.

Maybe 25 hours on a plane doesn't sound so bad afterall.....

Trouts: The Seychelles have become somewhat of a buzzword over the past few years when it comes to destination angling. However, you were in a region that had been closed to fishing for the past 5 years. How did you find yourself lucky enough to be part of this adventure, where exactly did you fish during the trip, and who were you with? In simplest terms, give us the backstory on this adventure. 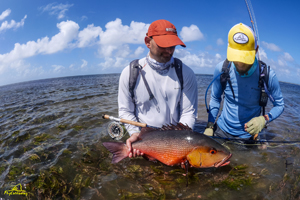 SH: I think most people think of the Seychelles as a secluded group of islands, centrally located in the middle of the Indian Ocean, which would be correct. However, what people may not know is that the Seychelles consists of over 150 islands stretching over 177 square miles. It’s a huge area and totally secluded. We were about 1000 miles from Aftrica and 400 miles from Madagascar. I was lucky enough to fill a last second vacant spot through Yellow Dog, one of those “right place, right time” scenarios. We fished the Providence Atoll in the southern region via a mothership, and fished with 7 other anglers, Tom Bie of the Drake being one of them. Confluence Films was also present, filming the Atoll in concert with the piracy issues that plagued this area in the past.

Trouts: Now for a question I know I’m not the only one curious about- how did you go about getting there and how long did it take?

SH: That’s a good question – essentially, I traveled over 25 hours by airplane through D.C, Dubai, Mahe and Farquar, then 8 hours by ship to our first destination on Providence Atoll. All of this took 4 days, we made our first casts on day 5!

Trouts: What was the most surprising thing about the islands/the area/the fish?

SH: The Atoll had surprisingly little exposed landmass relative to the overall size of the Atoll, but lots of shallow water flats fishing. You could have pictured yourself anywhere in the Caribbean/Mexico. The other surprise was how eager the fish were. It was common to have a fish of any variety eat your fly several times due to the lack of fishing pressure. I was also surprised how big the average bonefish was…

Trouts: Describe the feeling you had when you cast to your first Giant Trevally?

SH: You can’t describe how fast these fish move and you need to begin your cast way earlier than you think or they’re on you. When a GT decides to eat your fly, you can’t strip fast enough. Seriously, their closing speed is incredible!

Trouts: Now describe the feeling you had when you landed your first G.T.?

SH: So, to answer this requires a little background. The Seychelles is to GTs what the Florida Keys is to permit. The guides, mostly South African, like bonefish, triggers, bumpies and permit, but they love their GTs. It’s their passion and it’s difficult not to get caught up in the whole thing! It’s quite amazing to look at one of these creatures close up.

Trouts: When traveling as far as you just did to fish, gear failure is not an option. What gear did you rely on to help get the job done?

SH: GTs will destroy anything and I witnessed several flylines lost, rods broken and reels fried. It’s a long way to go so don’t show up with questionable gear. Flylines were recommended with at least 60 lb cores due to coral head abrasion. Most of the time we wade fished and I personally carried a Winston 9 and 12 weight, Hatch and Lamson reels and Rio and SA flylines. I also employed the Hatch backing which came in handy several times, preventing me from losing flylines – and fish! Bring back ups of everything!

At the top of the equipment list is good footwear. There are things in the Indian Ocean that will kill you if they sting you so don’t show up with flats booties, bring heavier footwear. Most everyone, including the guides, used the Simms OceanTek Boots.

A waterproof backpack is essential and with deeper channel crossings or downpours, you’ll appreciate having it. I used the Simms Dry Creek Z backpack as my airline carry on as well as my flats pack.. In addition, having a backpack makes it much easier to carry your second rod.

Don’t skimp on your rain jacket. Whether getting pounded by waves in the skiffs to complete downpours on the flats, you’re going to get soaked! And in any saltwater scenario, don’t forget sun protection. Simms Solarflex shirts and Sun Gaitors are light weight, easy to pack and easy to clean while abroad.

Trouts: What was your most memorable fish of the trip?

SH: I had an amazing day of GT fishing but there was this bonefish on day one… after hooking him, the fly popped out and he spooked, quickly moving off the flat. At about 150 feet, I watched him slow down, turn around and come back to the exact spot he’d been hooked, looking for the crab that had “pinched” him. When I finally landed him, I couldn’t believe how big he was! This fish epitomized the lack of fishing pressure.

Trouts: Describe your typical fishing day on the island.

SH: We broke the Atoll down into 3 sections, the mothership moving every couple days to the next destination. After breakfast and gearing up on the ship, the skiffs were lowered by crane, we’d jump in and typically, we’d play the tides finding a good spot to anchor the skiff. Depending on your quarry, there was quite a bit of walking in knee to waist deep water. Because of the expanse of the Atoll, we moved often. When the tide was played in one area, you might find moving water in another. What was interesting was the change in species with just a slight change in location. One area would be good for bones, the other for GTs and another for triggerfish.

SH: You know, I think the best part of any good adventure is the people you meet. I really enjoyed getting to know the other fishermen and Castaway staff. I know some friendships were created and a look forward to future trips with these guys. We had a lot of good laughs and what’s interesting is how you really get to know someone when there aren’t the distractions of cell phones and emails!