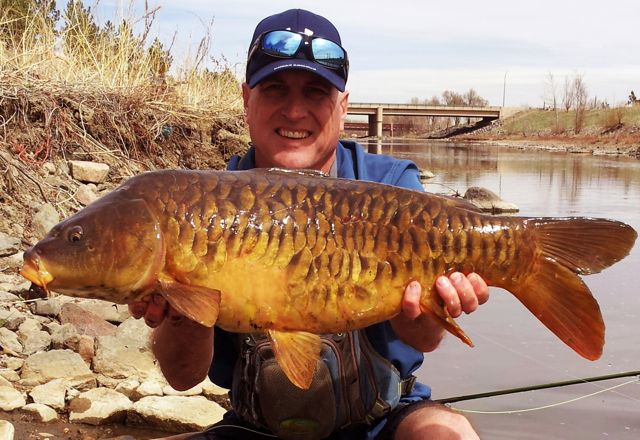 Around town and on the South Platte River, Barry Reynolds known simply as "the Godfather." At Trouts Guide Service, Barry is our go-to guy for carp trips and other "cool water" adventures.

He's been fishing for carp on the fly longer than anyone else than we can remember. Barry has guided the annual Carp Slam event every year since its inception and quite literally wrote the book on carp fishing.

We had a chance to sit down with Barry to talk about what inspired him to start his carp odyssey, tips and tricks he's learned along the way and what he has up his sleeve for the fishing season in 2013.

Welcome to Barry's world and “Carp Month” at Trouts.

Trout's Fly Fishing:you wrote the book on fly fishing for carp. How did that all come about?

BR:After the release of my first book Pike on the Fly I soon began talking to my publisher about writing a second book about another passion of mine Carp on the Fly… After numerous meetings and drawn out discussions my publisher wasn’t convinced that there was enough interest yet to publish such a book! Never one to give up easily I remained convinced that there was enough interest for this rarely talked about fish. I came up with the idea to re-approach my publisher with a multi-species book called Beyond Trout which would include chapters on pike, tiger Muskie, crappie, bluegill, and the final chapter in the book would be on carp. My publisher agreed on the new book and I had finally managed to get the word out on carp even if it was only a chapter and not a complete book. Over the following year the feedback was overwhelming and people were pushing for more information on carp. The following year was spent writing, collecting photographs; fly patterns and any other information on carp that could be found. All told it was over three years from our first conversation about Carp on the Fly until it was published. Quite honestly it was more work trying to convince my publisher to print the book than it was to actually write it! Carp fishing in the early years was both rewarding and frustrating. Rewarding because it was an untouched resource and very few people gave carp on the fly a second thought. I had almost every carp hole in the river and the lakes and ponds to myself to explore and discover at my leisure. Frustrating because there were no resources for information, no people to discuss thoughts and get feedback or share success and failures to learn from. Despite spending much of my childhood catching carp out of Leon Creek in Texas and knowing how to catch carp on bait and conventional gear I was still at an extreme disadvantage when it came to pursuing them with a fly! The ultimate reward in the end was the learning and the eventual success of catching carp on the fly.

TFF: you were one of the guys who pioneered fly fishing for carp on the South Platte River, when and how did you discover it was such a vibrant carp fishery?

BR: Believe it or not I learned about the carp fishery on the South Platte River while fishing downstream of Chatfield Reservoir while pursuing Brown Trout there in the late 70’s and early 80’s. Me and several of my fishing buddies used to catch some really nice trout back then just above the bridge on what then was County Line Road. We began to explore further and further downstream looking for other fishing holes and stumbled upon the carp. My first carp hole discovery came when exploring the river between closer to downtown Denver. Keep in mind that back then the river was really a mess and litter and garbage was everywhere in the river and not exactly a pristine piece of water but lots and lots of carp could be found milling about. Not exactly trout but we began to try and catch these fish with a variety of different nymphs, wooly buggers and whatever else we had in our fly box at the time! We had some early success mostly on olive wooly buggers with fish in skinny water. More times than not our offerings were refused but when we did manage to get one to eat we had a blast! That’s when the light switch really kicked on and when I first really actively started to pursue and chase carp on the fly in earnest!

TFF: Outside of carp, you are a warm water aficionado what other species do you like to target in the Front Range and South Platte River?

BR: First and foremost I am a fly fisherman. I love to chase and pursue all fish. Pike and Tiger Muskie are still some of my favorite fish to chase with a fly. I also have a deep passion for pursuing smallmouth and largemouth bass of fly tackle on many of the lakes around town! For a trout state we have ample warm and cool water opportunities as well! Another species I love to chase when the bite is happening is wiper (striped and white bass hybrid). There is a fish that hits like a ton of bricks and pulls like a freight train! At the end of the day though my deepest passion lies in the ability to pursue and present the fly when and where I can see the fish. Sight fishing is a fantastic opportunity to see the fish and how it reacts to our flies and our presentations - which is one of the reasons that make carp a worthy target and so much fun to pursue. 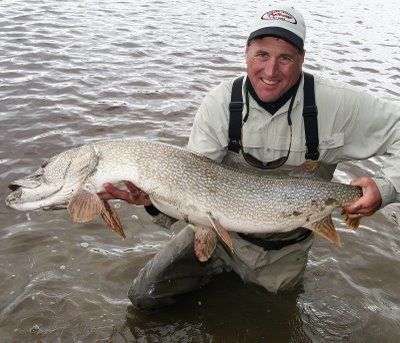 TFF:You guide full and half day trips out on the South Platte for Trouts Guide Service, tell us about your approach and strategy with a client on the river.

BR:Guided trips are so much more than just catching fish! I try to show people the water and teach them about the fish we are pursuing! I like to show them when I can the many different situations we see every day while fishing. On the river I like to show them the different areas where the fish hold, where the fish feed, skinny water situations, deep water situations and everything in between! To me the client is there to be educated about the water, the fish and most importantly how to pursue and present the fly in different situations so when they go back out on their own they have the tools and the knowledge to be successful on their own. 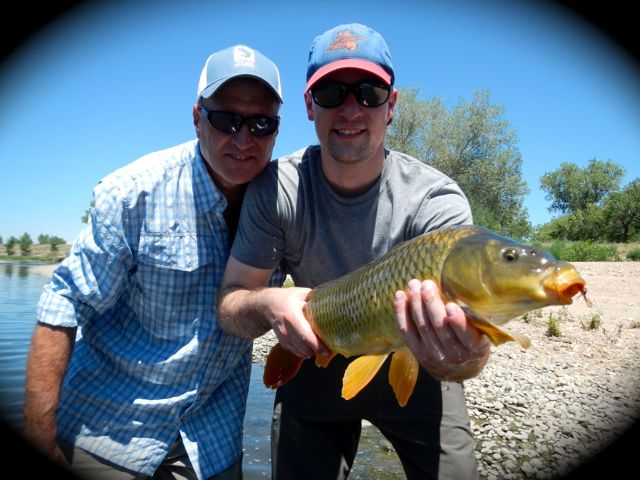 TFF: What's the largest carp you have landed in the Denver South Platte River?

BR: My largest carp on the South Platte… was 38” long and weighed 34lbs. I caught this fish a “few” years ago when I was filming a TV show for my series that aired on Altitude Sports so this fish was actually caught on film! The funny part of this was this episode called “Urban Warfare” was filmed the previous day and myself and one of my camera men returned the river the following day to get some “B” roll footage which is just basically fill footage and scenery shots! We had gotten all the fish we needed the day before as the fishing had been great and water levels were perfect! Anyway we returned the river to find the flow had come up and the water had gone from gin clear to off color overnight. So we grabbed a few shots and worked upstream a bit just to take a look. What we found was a mammoth carp tight to the tree lined bank just downstream, not exactly the best angle for a good presentation but I figured I would give it a shot none the less.

I was using my favorite go to fly at the time the Clouser Swimming Nymph. The big carp was actively feeding but getting the fly in front of her was tough due to the flow and the angle. After getting frustrated I half heartedly tossed the fly downstream past the fish, stripped the fly back past the fish and then let it drift back towards her. She gently slid a few inches over and engulfed the fly! The camera was rolling the whole time and if you listen closely you can hear me saying I give up on this fish and let’s get out of here! What I learned from that fish I still apply to day, I never give up on a feeding fish, I will pester that fish until I find the fly or the presentation that will convince the fish to eat or pester it enough till it leaves! Never say never and never give up!

TFF: tell us about your plans for 2013 and what you have on your docket?

BR: I have several travel trips I am looking forward to, back down to the Gulf to chase bull reds in the fall and tarpon in Belize later this summer. Locally I am looking forward to the continued search of finding more secret carp ponds but also I have become enamored with Smallmouth again and the last few years I have spent half my time chasing carp and the other half chasing smallies around town! Of course I will also find some time to pursue pike and tigers as well!

And there you have it.