We are back for the first installment of the Trouts Warmwater Forecast for the ’22 season. Rather than echo hopes and aspirations for the transitional months, I’ve saved this piece for the real kick-off to quality warmwater fishing - May. A nice, warm and mellow April has created an ideal transition into the best warmwater month of them all. If the wind will just chill out for a bit, May will be one for the books!

The DSP has been and will continue to fish 🔥 through the month of May. Mild weather, good flows, and plenty of sun have all the urban residents happy and feeding. Smallmouth fishing this spring has been exceptional. The quality and quantity of smallmouth has been the best I have seen in my fishing career.

Good clarity has made for excellent sight fishing for carp throughout the DSP. The annual spawning ritual begins near mid-month. 60 degrees seems to be the magic number for DSP carp, but the range is as broad as 55-75. We have seen some females begin to breach and loosen egg sacks in the river behind the shop. The DSP carp population is putting on weight quickly, both from aggressive eating and fast-growing egg sacks in the females. The biggest carp of the year are caught in May, and it is the best time to break the high 20’s to 30lb mark!!! Read more about strategies for fishing the carp spawn in the ponds section below.

Go fishing! This is as good as it gets for all small water species! Water temperatures are a little ahead of normal, and fish of all varieties are ready to eat. As always, structure is key, but panfish, perch, and bass are poised to get as many calories as they can as they approach their respective spawns. Perch and panfish will primarily be focused sub-surface, and small leeches and medium-sized general attractor nymphs are deadly. Fly should rarely matter, so long as it has a little flash, and they can fit it in their mouths.

Bass will begin to patrol the shallows, looking for adequate spaces to clear beds for their annual spawn. They rarely feed when in the shallows but stop to eat among the structure and drop-offs adjacent to the spawning substrate during the building process. Casting jig style patterns and baitfish at and through structure and drop-offs will often yield feisty largies and smallies filling up before the mating ritual.

At a consistent 60 degrees, bass will move onto shallow beds to spawn. The beds are easily identifiable circles of bare sand or dirt, free from any sticks or vegetation. Once eggs have been deposited, the male will remain and protect the nest until the eggs have hatched. The male will often aggressively strike anything that comes into the vicinity of the bed, and while not eating, can often be caught fair as they strike or pick up and physically remove intruders with their only manipulatable appendage, the mouth.

This can be an unbelievably productive time to fish for trophy bass, as they are visible to the naked eye, and will often attack, or at least remove, anything that comes into their bed. However, there are a couple of camps in the bass world as it pertains to the ethics of fishing to bedded fish. It is best to do some research and understand the dynamics before you choose to act during this period. If you pull a fish off a bed and quickly and safely release it, it is very unlikely it will have any impact on the survival rate of the eggs. The male will return and defend, and unless predators are rampant (the gobies of the Great Lakes are a prime example), the nest will be fine.

Many studies have been done to test this, and in many fisheries, bed fishing has had no quantifiable impact, but the variables are great. If the female is targeted on a bed, and overly stressed, she may withhold from spawning for days after, and in short temp windows, may not spawn at all. If the male is removed for an extended period, say in the live-well cull of a tournament angler, or while your buddy runs back to the car to grab the camera, predators can raid the bed, and potentially decimate the entirety of the egg stock. Most bass tournaments have adjusted their format with the safety and proliferation of the species in mind and use technology to quickly document size and safely release.

Largemouth females over-produce eggs to ensure better survival rates, and often spawn with multiple partners in multiple beds to ensure success of the next generation. Smallmouth are much more susceptible to impact from bed fishing, as their temp window is substantially slimmer, and their production rates are on average lower than largemouth. Science has documented a marked impact on smallmouth in the Great Lakes from bed fishing. Here in Colorado, large and smallmouth stocks are smaller that throughout most of the country. As a result, they may be more impacted by prolonged bed removal as compared to places where the species are more abundant.

At the end of the day, environmental factors like temperature, pollution and predation on fry will likely have a MUCH greater impact on survival rates (especially if landing and handling time is minimized). While it is a very rare circumstance, as you would be walking right where the fish are, there is potential to wipe out a bed by stepping on it. So, if your fishing calls for wading, be mindful of where you step - as to not crush future catchable bass!

The carp fishing in small ponds should be epic in the coming weeks, as fish feed aggressively before the spawn in late May. With the increase in food intake and large egg sacks in the females, carp are at their top weights this time of the year and opportunity for fish over 20lbs is at its highest. Fishing the carp spawn is one that there are no ethical concerns over whatsoever. Carp are broadcast spawners, the female broadcasts hundreds of thousands of eggs, and groups of males chase behind, bumping, crashing, back-flipping to be the one to fertilize them and continue their genetic line. It’s quite a spectacle, pods of fish exploding in a fury all over a lake or pond. While fish are actively spawning, it’s a slim chance of catching them, already quite a challenge to put a fly anywhere near the zig-zagging ball of energy that is a spawning group, these fish are much more focused on procreation than eating.

(1) Every fish in a body of water is in the shallows close to shore.

(2) They spawn in spurts, and feed between, so move past the exploding spawners, and find fish feeding aggressively on the edges, hoping to fuel their next roll in the hay.

(3) Fish refueling during the spawn can be some of the least picky fish of the year. Fly selection becomes easier, as they will eat just about anything that looks like something they have eaten before, and they are markedly less spooky. These are the high numbers days we have all been waiting for!

Wiper are pound for pound the hardest fighting fish in Colorado, a 1lb Wiper pulls like an 8lb Carp! May is the absolute best time to target wiper in Colorado. Wiper are a sterile hybrid of the White Bass and the Freshwater Striper, and stocked in many of the reservoirs on the Front Range. There are opportunities for fish up to 20lbs in Colorado, but any fish over 18” can be considered a trophy. Wiper of all sizes will give you a fight worth remembering. White Bass, wiper's much smaller, but equally feisty cousin, are also present, particularly in the Northern Front Range. Wiper and white bass spend most of the year free-roaming, chasing baitfish wherever they may be in an impoundment or in the water column, often making them difficult to pattern unless birds or busting baitfish reveal their current, but often fleeting location.

In the late spring, when water temps exceed the low 60’s, these fish move into inlets, creek mouths and any other moving water to spawn. Wiper are sterile, and cannot successfully spawn, but white bass can and often push up further into the actual creek or inlet itself. Wiper will be concentrated in the transition and unlike the rest of the year can be easily patterned. Fly selection is not that easy, as much like their larger cousin the striper, the size and profile of your fly must be spot on for the forage in the lake. This forage can include Shad, Shiners, Bass and Carp fry, and a plethora of small baitfish. Once you match the hatch, presentation is the next key factor.

Bait is abundant in most large CO reservoirs, and you need to take advantage of the predator/prey relationship of these ecosystems. Wounded or weaker prey is easier to eat, so erratic and varied speed presentations are key. Always start slow and speed up your retrieve until you find the sweet spot, making sure to add lots of pauses and jerks. I like to fish buoyant flies on sinking lines to add even more action (the fly rises when I pause, and runs down when I strip). My favorite is a full intermediate line, as I can control depth throughout the first 15ft of the water column, where most of these fish are holding during this time. A 6-8wt rod is adequate, but on the smaller end of that spectrum, get ready for a wild ride. 12-16lb Fluoro (for sink rate and durability) leaders are the appropriate size to avoid breakoffs. In certain bodies of water that are home to pike, May can also be lights out, as water temps get back into the 60’s, Water Wolves return to the shallows to feed after some post-spawn recovery time in the shallows. Northern Pike are a limited offering on the Front Range, but there are opportunities, and water temps are quite favorable until Mid-June.

Rick's Flies for May Warmwater 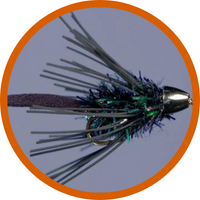 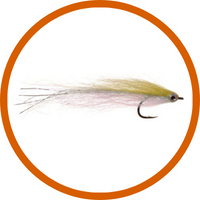