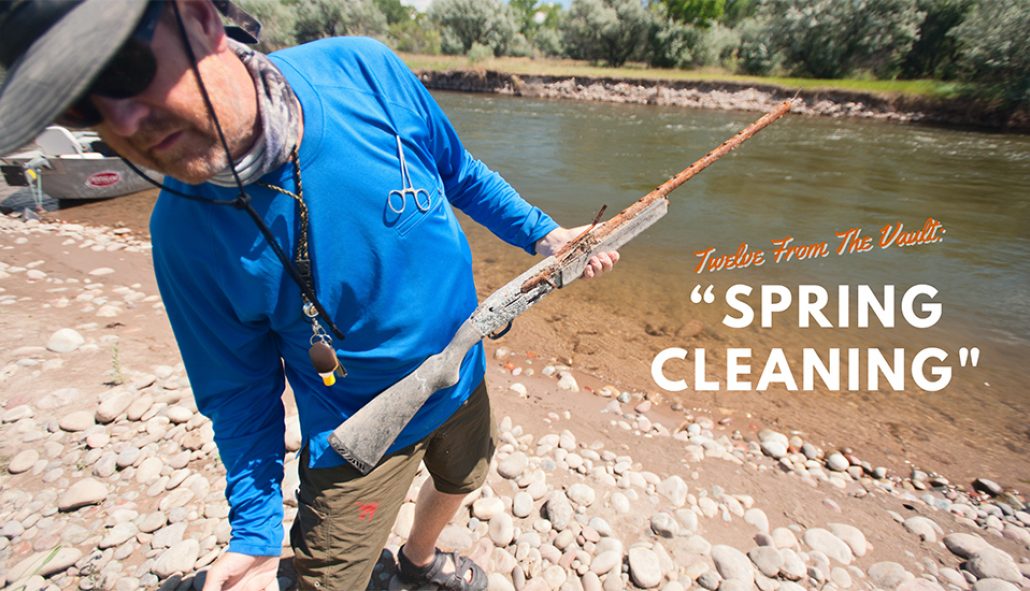 Twelve From The Vault: “Spring Cleaning”
By copi vojta

Recently, I've been doing a bit of spring cleaning. One counter top had a fine layer of dust and was littered with unopened bills and junk mail and a whole bunch of other randomness that I'd been neglecting for far too long. It was like an archeological dig. During the dig, I also rearranged my river altar, as I like to call it. It's mostly a collection of cool rocks, old fishing lures, bobbers, feathers, plastic toys and other memorabilia, all of which found during various fishing excursions.

There is even a gun. Not the one in the photo though. I didn't find that one. Craig Davis did, so he got to keep it. His nickname is Grumpy, because he is. The two of us were fishing with Tony Fotopulos on the Colorado River and had pulled over at the top of an island to wade fish a side channel prior to floating over it. Craig stumbled upon the rifle wedged in the cobble on the riverbank. That rifle is partly what inspired me to start collecting, perhaps hoarding, all of the interesting things I find on the river. The gun that I found was an air powered pistol, lodged between boulders in a small creek that led to some sweet steelhead water.

During the cleaning spree an old severely corroded and unrecognizable fly reel, stashed away in boxes found a new place within the altar, as did a rusted and bent Utah license plate found in the Colorado River. There are two Washington license plates, one was found screwed to a piece of driftwood. A few turns from a Leatherman loosened it from the tree and it became a worthy addition to the collection. One of the weirdest finds was in British Columbia: a message in a bottle. The writing was still legible, notes from some young Canadians some fifteen years prior, and two disturbing children's drawing featuring smurf-like characters holding firearms, birds circling, a dog behind a fence and a gravestone-looking thing. The ingredients of nightmares. A plastic toy boat, shovel and cowboy hat bring a bit of levity back to the whole thing. A little lego man also helps. The most recent addition was a rusty saw blade from one of my favorite swing runs.

The spring clean wasn't something I'd been looking forward to, and I'd been putting it off for way too long. But it felt good once done, my house is a bit nicer to hang in without the clutter. While it's not always a fish, or lots of them, that I let decide a good day, these little talismans and the spruced-up fishing altar bring back memories of time well spent every time I pass by it, something we can all use when we're not fishing.

Editors Note: Introducing the “Twelve From The Vault Series." Copi Vojta is a photographer and the photo editor at The Flyfish Journal and currently resides in Bellingham, WA. I first came across his photography while paging through the Drake Magazine on a road trip back in 2009 when he lived in Carbondale, CO. In a sea of fly fishing magazines that existed back then, Copi’s images were different and special – his photography stood out.

Later, Copi and I later crossed paths on the first leg of the infamous “Ride With Clyde” series that spanned from 2012-2019 published by the Drake. I rode shotgun while Copi shot images of the fuzzy green dice hanging from the rear-view mirror as we bumped our way through the Roaring Fork River Valley. For 2021, Trouts has commissioned Copi to dig through his old hard drives and memory cards from the days he spent fishing here in Colorado. This is his fourth piece in this series – and you can click these links for Part I, Part II, and Part III. - Will Rice
Back to Blog