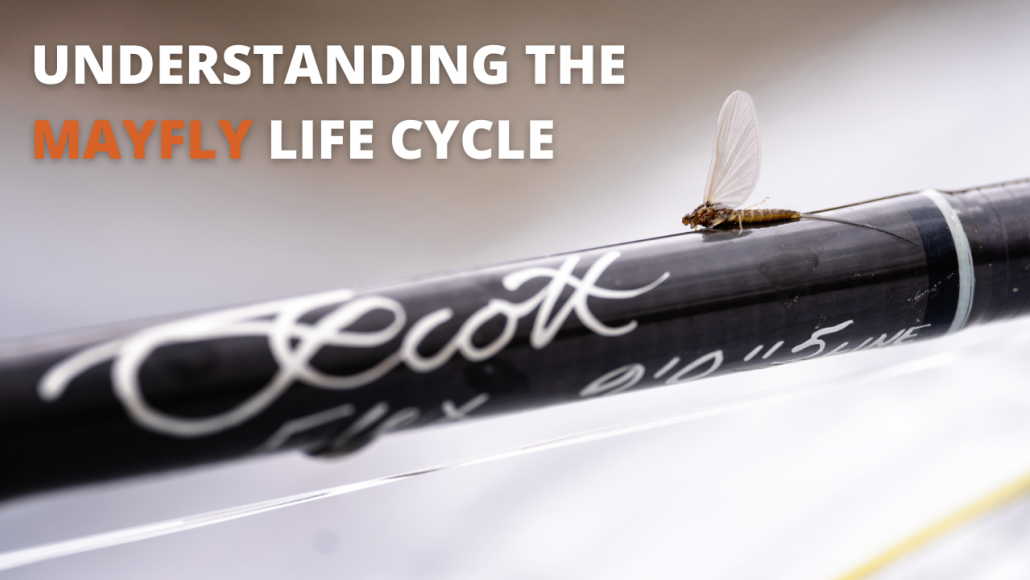 Grouped into the scientific order Ephemeroptera, mayflies are short-lived winged insects whose adult life lasts as little as 24-48 hours. Rough. However, the entire life cycle of the mayfly is segmented into four stages (egg, nymph, and two air-breathing adult stages) and can take upwards of a year to fully complete. The nymphal and two air-breathing adult stages are where anglers should focus their attention. Since their four life stages are spread out over the course of (about) a year, anglers should be aware of the four stages of life and know how to effectively use this vital food resource to their advantage on the water.

Below is an overview of the mayfly life cycle, and each stage an angler needs to understand, in order to effectively fish mayflies just about anywhere in the west.

The earliest stage of a mayfly's life cycle begins when an adult mayfly reaches imago - the final form of a winged insect. Known as a “spinner,” the female mayfly deposits her eggs on or just below the water's surface. Done with their instinctual obligation, the Spinner is exhausted from laying eggs, falls, and expires within a few hours.

Within a few days, or as long as two weeks, the tiny eggs deposited will begin to hatch into nymphs.

Now well below the water's surface, the newly hatched nymphs begin to distribute themselves among the various mineral bottoms they are best suited for. When it comes to mayfly nymphs and habitat, there are many. Each one is born with specific characteristics that make it well adapted to its environment. For example, the nymphs found in fast water with a gravel bottom are different anatomically from the nymphs found in streams whose bottoms are mostly mud and silt.

While in the Nymph stage, these tiny organisms will feed on various plants, dead or alive, among the rocks and river bottoms. For the mayfly nymph, much of its life is spent among these parts, and it only ever moves due to external factors– i.e. fluctuations in water levels from drought, flood, or water control. Other factors that influence a nymph's displacement is poor water quality in the form of high water temperature and low dissolved oxygen levels.

Nevertheless, mayfly nymphs can find themselves in one of three places during the nymph stage. As we mentioned before, different nymphs are adapted to different environments.

A. The crawlers, clingers, and swimmers live in areas of rock, rubble, coarse gravel, and aquatic vegetation of stream and lake bottoms.


B. Crawlers also live in slow or sluggish areas of lakes and streams that have small gravel, accumulations of dead aquatic and terrestrial vegetation, and silty areas.


B. Burrowers dig into the lake and stream bottoms, where U-shaped burrows in sand, silt, and mud areas are their homes until the hatch begins.

The most vulnerable segment of a nymph's life is during the beginning of, “the hatch.” During this stage, the fully mature nymph becomes fully exposed to its predators as it tries desperately to swim up through the water column to transition to its next life stage, the “dun.”

While on its way up the water column, the mature nymph will wiggle and twist itself free of its hard exterior shell. Typically this will be a direct split down the back of the casing, coming fully separated from the nymph. Once the nymph has removed itself entirely from its casing: two wings, a thorax, head, and legs emerge. The once vulnerable nymph has transitioned into its next life stage, the “dun”.

"The transformation from nymph to dun (once on the water's surface) only takes a few seconds to a few minutes. This is a crucial time for anglers to capitalize on a trouts feeding instincts. During this transition, some nymphs may be deformed or injured, thus unable to fully form into a dun – make sure you have some cripple flies!"

For many mayfly species across the western United States, mayfly hatches only occur during a one to three-week window once a year. However, if an angler finds themselves on spring creeks where the water temperature is near-constant, mayfly hatches can be almost a daily occurrence.

Now that the nymph is fully formed into a dun, the next step is food. After the air temperature hardens the wings and body of the dun, they often skip and flutter across the water's surface– another action trout key into. Using available crosswinds to their advantage, the dun will fly to the nearest shoreline to gorge themselves on the vegetation.

During this (subimago) state, the dun will try to conceal itself the best it possibly can among the foliage and patiently wait until the perfect weather and temperature conditions to begin its final transformation into a spinner (imago).

Like its past self, the dun will begin to shed its skin when the right temperature and weather dictate. For many mayflies, this transformation typically takes place where it has tried to conceal itself.

In its final form, the sexually developed male spinners begin to form a swam near the water's surface. The female spinners key into this mating ritual, and both the male and female spinners (imago) mate while in the air. Mating for the fully adult mayflies lasts anywhere from one-three hours and typically occurs twenty-four hours after becoming a dun.

The now mated female spinners are ready to deposit their eggs on or below the water's surface –exactly where we began. This is typically associated with the mayflies' quick touching and hovering above the water’s surface.

Now that their mating and egg-laying obligations have been met, the spinners become exhausted, and fall to their final resting place-the waters surface or adjacent shoreline. This is known colloquially as, “Spinner Fall”.

Typically the female spinner deposits their eggs in the same proximity from where they were they made their transition from nymph to dun. Eventually, these deposited eggs will turn into nymphs, duns, and spinners, thus completing the mayfly's beautiful yet straightforward four-stage life cycle.

The mayfly life cycle is important to anglers and is one that can heavily dictate a day out on the water. While the adult life of a mayfly lasts only a few hours, the nymph stage lasts for months - this is why having appropriate nymph patterns and styles is so important for the angler looking for a successful day.

I hope you enjoyed this overview of the mayfly. Stay tuned to the blog, where we will be going over other important insects. If you have questions regarding hatches, we have a dense selection of books perfect for any skill level. If you are looking for an in-person way to expand your knowledge on bugs, check out our Bugs for Beginners class hosted at our Denver shop location!

No matter your skill level here at Trouts, we want to ensure that your time on the water is well spent. That means we want to answer any questions you may have regarding hatches, flows, or where to fish this weekend. Fly Fishing Guide to the Colorado River and Tributaries Flyfisher's Guide To Colorado
Back to Blog