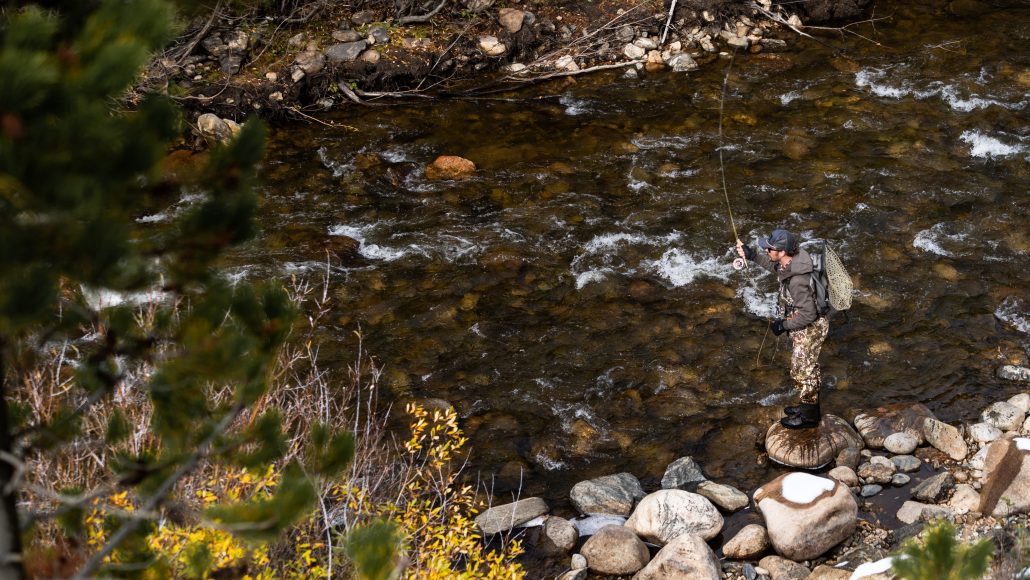 The debut of SIMMS' River Camo had the fly fishing industry buzzing in 2018. After all, it was the first fishing specific line of camo.

We sat down with SIMMS own John Frazier to discuss all things RIVER CAMO from design time, seasonality, applicability, and of course - the most interesting - fractal math.

SIMMS: With all of our products, whether it’s waders, rain gear, footwear, or even sportswear, we want to give the angler an edge. In terms of River Camo, we didn’t want to come out with a camo pattern just because it looked cool, we wanted it to work and give anglers the upper hand when stalking or pursuing spooky fish. Creating technical fishing gear is the key component of Simms’ DNA and is truly at the core of everything we do. It was a long and tedious design, development, and testing process but in the end, we are extremely happy and proud of the end result.

TROUTS: How long has River Camo been in the works? How long did design and R&D take? How many iterations of River Camo came to be before the final design made its way onto shelves?

SIMMS: You know, camo has been a topic of conversation at Simms HQ for a long time but I would say from the time we really decided to stop talking, and start creating, the whole process from start to finish took about 18 months. Once again, it was a long and tedious process and if I remember correctly, there were about four iterations before we felt like we had the colors and patterns fully dialed.

TROUTS: Rumor has it that there was a fair bit of high-level math involved with design of River Camo. If I paid more attention in my high school Calculus class, would I understand how River Camo was designed?

SIMMS: Hahaha. Honestly, I don’t think so. There’s definitely some Good Will Hunting equationology going on there. I don’t know about you but in all my years of schooling, the terms Fractal Math, Chaos Math and the Golden Mean were never part of the lesson plan (luckily). My take on the scholarly side of River Camo goes as follows: Math + Science = a camo solution best suited for experts to figure out.

TROUTS: What differentiates River Camo from the camo designed for waders used in waterfowl hunting?

SIMMS: The camo experts I just mentioned came from Kansas based, Veil Camo. Veil is all about scientifically engineered concealment. With Veil’s help, Simms’ River Camo pattern uses Mother Nature’s own mathematical signature in every step, layer, nook and cranny of the overall design and function. Our pattern definitely uses ideas and theories used in traditional hunting camo patterns – things like shape distortion, contrast, color etc, etc, but I think the biggest differentiating factor is that the pattern was based specifically on what fish see/perceive above the surface. Think about it like this, a camo designed for waterfowl hunters is based on what ducks or geese see from above – River Camo is based on what fish see from below.

TROUTS: What factors play the largest role in the design of the River Camo - Color, Shape, Contrast?

SIMMS: Camouflage is all about blending into a background, and a big part of blending in is breaking up shape. But of course, in order to break up shape – color and contrast have to be taken into consideration. I don’t think there’s any one component that plays “the” key role. Instead, I think it has more to do with finding a perfect balance between all of the aspects mentioned above.

TROUTS: What environ is the River Camo design based on and best suited for?

SIMMS: Well, the River Camo pattern was hatched in the Rocky Mountains. While all of the testing took place in Colorado and Montana, we’ve also received many positive testimonials from anglers fishing in other parts of the country and other parts of the world. It’s not so much about where the pattern was designed for as much as it is what the pattern was designed for. Anywhere you need to get one step closer to that perfect casting moment is a perfect place to put River Camo to the test.

TROUTS: If you see a spooky, rising 23” rainbow trout on your favorite tailwater located 60 feet upstream of you, how much extra real estate does the River Camo buy you when you’re setting up to cast?

SIMMS: Tough question, but a fair question. In short, wearing River Camo while stalking spooky fish is certainly going to help. However, because every situation is different, it’s hard to give a concrete answer to this one. When you’re wading, you’re constantly scanning to find the next juicy spot to make a drift or present your fly. When you find one, chances are, you’re not going to stomp up to the spot where you think a fish is sitting. You’re going to make a stealthy approach. River Camo takes that stealthy approach to the next level.

TROUTS: What angling situations is River Camo best suited for?

SIMMS: By and large, River Camo was developed for walk wade anglers. This pattern is going to work the hardest in situations or setups where a delicate approach and/or presentation is required. Skinny water, ultra-clear water, sight fishing scenarios – any time fish are on edge, River Camo is going to buy you a little extra time and space to make that perfect presentation without being detected.

TROUTS: Is River Camo applicable for chasing species other than trout?

SIMMS: I’d go back to the answer to the previous question. Sure, it was designed with trout in mind, but as we all know, trout aren’t the only species out there that get spooky. Nor are they the only species out there that stage, and feed in skinny, clear water. Once again, River Camo is going to be an ally for any situation where an extra degree of stealth is required. I can’t say too much at this point, but we have taken the same ideas and concepts used in our River Camo pattern and are applying them in a pattern geared towards anglers chasing bonefish, permit and other spooky salt water gamefish.

TROUTS: Is there a best season to wear River Camo? Or was it designed for year-round use?

SIMMS: I suppose at its core, spring, summer, and fall would be optimal times to utilize River Camo but you know, I think there are applications during the winter that anglers could benefit by wearing River Camo. I know for me, when I want to take a break from skiing, spring creeks are always a viable option during the winter – and we all know how spooky spring creek fish can get. I also think it’s important to point out that we offer a super wide range of products featuring River Camo and these products range from UPF50 sun protection gear such as our SolarFlex® Longsleeve Shirt to our PrimaLoft® Siver Insulated Bulkly Jacket. So no matter what season anglers want conceal themselves, we have River Camo options that can keep anglers protected from the sun, wind, rain, snow, and cold.

SIMMS: As I mentioned before, we knew that if we were going to create a fishing specific camo that was more than a fashion statement, we were going to have to partner with experts. One aspect that was super attractive regarding Veil, is that their ideas and theories were science based. In addition, Veil was totally stoked to take on this project. They had the time, and expertise to truly start from the ground up to build, and engineer a camo that was exclusive to Simms and created specifically for fishing.

TROUTS: Fishing aside, would this be well suited for hunting big game or waterfowl in riverine environments?

SIMMS: Another tough, but fair question. I’d like to take this opportunity to reiterate that this camo was designed based on what fish see above the water’s surface. All of our R&D and testing regarding River Camo was based solely on fish, and fishing. I think in the end, the answer to this question is better left in the court of the consumer.